Dera Sacha Sauda, the socio-spiritual organization successfully conducted its 22nd Mega Cleanliness Campaign in educational city Sikar, Rajasthan on Oct. 7, 2013 under the holy guidance of Revered Saint Gurmeet Ram Rahim Singh Ji Insan. The campaign was undertaken by the organization to clean the filth from city as well as to spread awareness among localites to keep their surroundings and public places clean. The drive is an execution of Dera Sacha Sauda's welfare movement having slogan "Cleanse the Planet Earth to Remove Disease and Curse". Around 2 lakh volunteers and members of Shah Satnam Ji Green 'S' Welfare Force Wing flocked into the city carrying brooms, shovels, grass cutters, bin bags and not only just cleaned the city but also set a milestone by completing the task in just two and half hours. 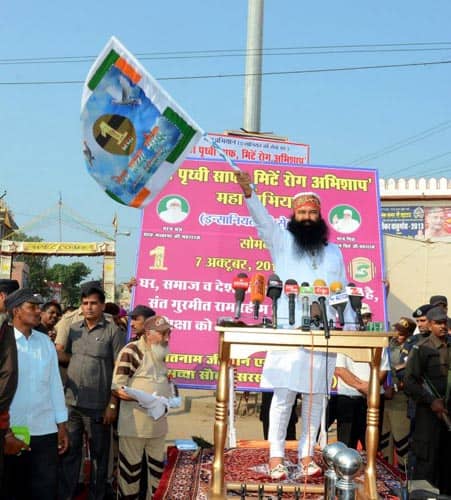 Revered Saint Gurmeet Ram Rahim Singh Ji Insan commenced the drive from Paanch Batti Circle, Jaat Baazar at 8 AM by leaving a cluster of gas filled balloons in air having slogan of the campaign attached to it and sweeping off an area with a broom with HIS pious lotus hands.

Revered Guru Ji then showed green flag and commanded all volunteers to complete the noble cause with full earnest and blessing them with HIS divine benevolence appreciated them and said, "Blessed are the parents whose children come forward to render selfless service for other's welfare, otherwise, its very difficult to do selfless service in this Dark Age. The Lord may bless them with budant happiness." Revered Guru Ji further said on the importance of cleanliness, "Clean surroundings will enhance the remembrance of GOD and help in eradicating vices from one's self. Filth in surroundings give birth to bacteria and diseases which are the cause of falling psyche of human beings and lead man into monstrous acts." His Holiness requested localites to keep their city clean in such a manner that there arises no need of a cleanliness campaign again. We should not blame the municipal authorities only for all this grubbiness instead we ourselves must keep our surroundings clean and shopkeers should keep a dustbin around their shops so that garbage is not littered here and there. Revered Guru Ji also emphasized on planting more and more trees as they will be loyal and serve our many coming generations.

Many officials and dignitaries attended the inauguration of this Mega Cleanliness Event and paid gratitude to Revered Guru Ji for this noble effort. Former Union Minister Subhash Maharia said, "This campaign is a big source of inspiration. The population of Sikar is around 2.5 Lakh and if 5% residents get aware through this drive, thousands of people will adopt the practice of cleanliness. The drive also signifies Unity which will build the spirit of brotherhood and equality amongst people. 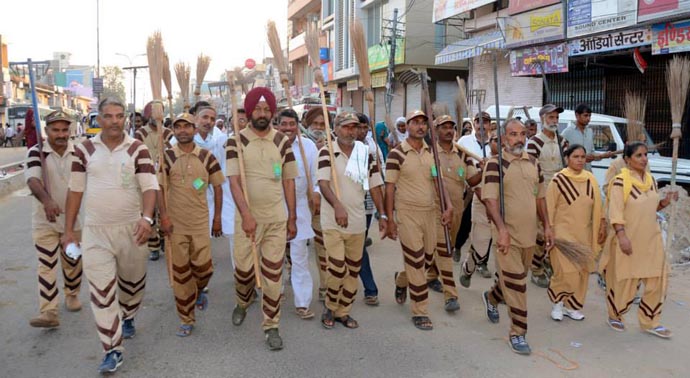 The whole city was divided into 5 zones and lakhs of volunteers who participated in the campaign from several states viz. Haryana, Punjab, Delhi and other cities of Rajasthan cleaned the whole city devotedly in just 2.5 hours. Along with it, they got thousands of pledge forms signed from local residents who vowed to maintain cleanliness in their surroundings in future.