Men of yore always pondered about philosophical questions like:

How did the Universe come into being?
Does God exist? Why can’t we feel him or at least see him?
Who am I? How did I come about?
What happens after death?
What is the meaning of life?
Are morals of any relevance?

Such questions have hounded man for ages. And it is to answer these questions, GOD sends HIS messengers in every Yuga aka Era. These messengers come in the form of Saints, Prophets, Gurus, etc. They make man realize his roots and what religion is all about.

Religion deals with man’s obligation towards GOD and forms a meaningful bond between him and GOD. And although you may find this hard to believe, religion or spirituality as we know them today wouldn’t have ever been born had Saints not existed! Saints are blessed souls who incarnate on this earth to provide the true knowledge of life to mankind, without asking for anything in return, and certainly not for money. They form the basis of spirituality and religion. And they never disperse facts without trying them first by themselves. The answer to all the questions mentioned above is together knit into a collection of texts which are then propagated under the umbrella of a religion or a sect. They come to earth to prove to the man that GOD indeed exists and so that they can make him rise to the level of GOD. It is through Saints that what we know as morals and virtue float in society today. Customs too are made by Saints of yore.

Saints are indeed messengers who aim at self-enlightenment and introspection for man.

In this Dark Age aka Kal Yuga, evil is at the very peak in society. A Savior of Humanity, His Holiness, Shah Mastana Ji Maharaj incarnated himself, thus, and founded a Socio-Spiritual organization which we today call the Dera Sacha Sauda in Sirsa.

Literally means a place of real truth.
God’s True words or the True Method of Meditation is imparted over here.
Guru of His Holiness Shah Mastana Ji Maharaj, the Revered Saint Sawan Shah Ji Maharaj when pleased with Mastana Ji’s eternal love for his Satguru, embraced Mastana Ji with the divine power of Spirituality. He sent him to semi-arid Transitional Plains of India known as Bagar area to emancipate people through God’s True Words. Mastana Ji was then honored with the title of “Emperor of Bagar” by Revered Sawan Shah Ji Maharaj. Respectfully, He chose Sirsa as the epicenter of Spirituality and put the foundation stone of Dera Sacha Sauda on 29th April 1948. His Holiness taught the Method of Meditation for 12 years to thousands of seekers and encouraged them to abandon evil deeds and live an honest living through hard work. Shah Mastana Ji Maharaj also established at least a dozen additional ashrams in the states of Haryana, Uttar Pradesh, Punjab, Rajasthan, Delhi, etc. He tried to shower his divine blessings far and wide.

Revered Shah Mastana Ji Maharaj embodied Himself, the Divine Light, into the body of Adorable Param Pita Shah Satnam Ji Maharaj and empowered Him with divine power to carry the task of salvation of mankind. His Holiness Param Pita Ji very devoutly and lovingly watered the seeds of spirituality sowed by Revered Shah Mastana Ji Maharaj and through the sapling grown from it, the fragrance of spirituality was spread in every corner of the world. Adorable Param Pitaji amplified the pace of emancipation and blessed around 11 Lac 08 Thousand 429 Hundred people with Method of Meditation till August 26, 1990.

His Holiness Param Pita Shah Satnam Ji reincarnated HIMSELF into the human body of present Guru Ji Saint Dr. Gurmeet Ram Rahim Singh Ji Insan and passed on the same Divine Light to HIM. His Holiness Param Pita Ji while addressing the whole Sadh Sangat, the company of Holy, strongly affirmed, “We were, We are and We will be” clearly mentioning that the same Divine Power which started working with Revered Shah Mastana Ji Maharaj is still working and will keep on working in the form of Hazoor Maharaj Ji for the salvation of mankind. Today, the sapling of spirituality which was planted by Shah Mastana Ji Maharaj, nurtured by Param Pitaji, and handed over to Hazoor Maharaj Ji, has grown into a huge tree with over 5 million devotees as branches. Hazoor Maharaj Ji has helped million of people get rid of their vices by teaching them Meditation.

Moreover, Revered Guru Ji is a true humanitarian at heart!

He has initiated 138 humanitarian activities for the welfare of all types of living beings including flora, fauna, and humans. According to Him, every living being is a child of GOD, and to serve GOD one must serve HIS Children. The miracles which took place through His humanitarian works earned the Dera Sacha Sauda Sirsa the recognition of Guinness Book of World Records (not once, but 18 times) amongst those from several other national and international authorities! Adorable Hazoor Maharaj Ji has guided the Dera with His Holy guidance and leadership to previously unknown heights in Spirituality and Humanity. The Establishment of dera sacha sauda

Dera Sacha Sauda, the socio-spiritual organization was established by most Revered Saint Shah Mastana Ji Maharaj on April 29, 1948 in commandment of HIS Guru honorable Saint Sawan Singh Ji Maharaj. When honorable Guru Ji (Sawan Singh Ji Maharaj) blessed HIS Holiness Shah Mastana Ji with the divine power and ordered HIM to emancipate people in area of Bagar, HE along with some devotees started looking for a site to establish Ashram and then finalized the place where Shah Mastana Ji Dham stands today. The Ashram was then named as Dera Sacha Sauda by revered Guru Ji. This place is situated about two kilometers from the city in the southern direction, on the Sirsa-Bhadra road, which is famously known as Shah Satnam Singh Ji Marg. The place during those times was barren land covered with thorny bushes, but His Holiness chose this piece of land and made it the most auspicious place for the whole world where people from all caste, religion and race come together, without any discrimination and chant the Supreme God’s Name in an equal manner. 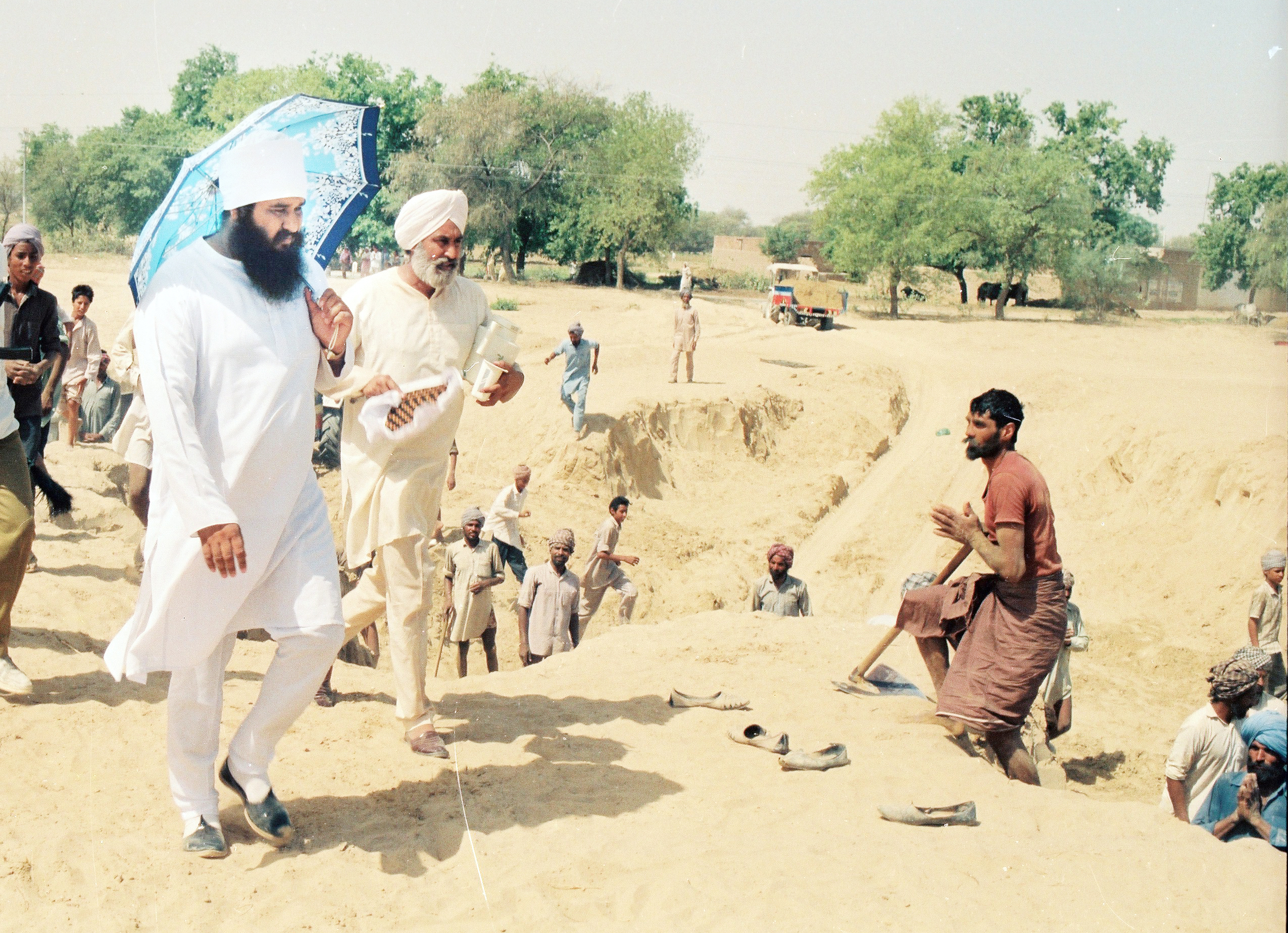 Adorable Shah Mastana Ji with his pious hands dig the first spade on land and laid the auspicious foundation for the ashram. On this occasion, a disciple from Mumbai sung the spiritual rhyme “Hari ki kathaa kahaaniyaan, Gurmeet sunaaiyaan (the stories and legends of the Lord, narrated by the beloved Guru)”, and Mastana Ji expounded on the rhyme. The construction of ashram then began in all earnest and devotees from nearby areas came to be a part of this service. The construction work went on continuously for days and nights. Thorny bushes were uprooted and the earth was leveled at the site. Many snakes, scorpions and other poisonous creatures apparently came out of the earth. His Holiness ordered the volunteers, “No creature should be killed. It should be caught and let off at a distant place.” On the holy command of Guru Ji, no animal was killed and neither did any of the snakes, scorpions or other poisonous creatures harm anyone. The volunteers used to catch the snakes, scorpions, etc.; immediately took them to a place far from human settlements and left them there. This miraculous practice is being followed in Dera Sacha Sauda till date. 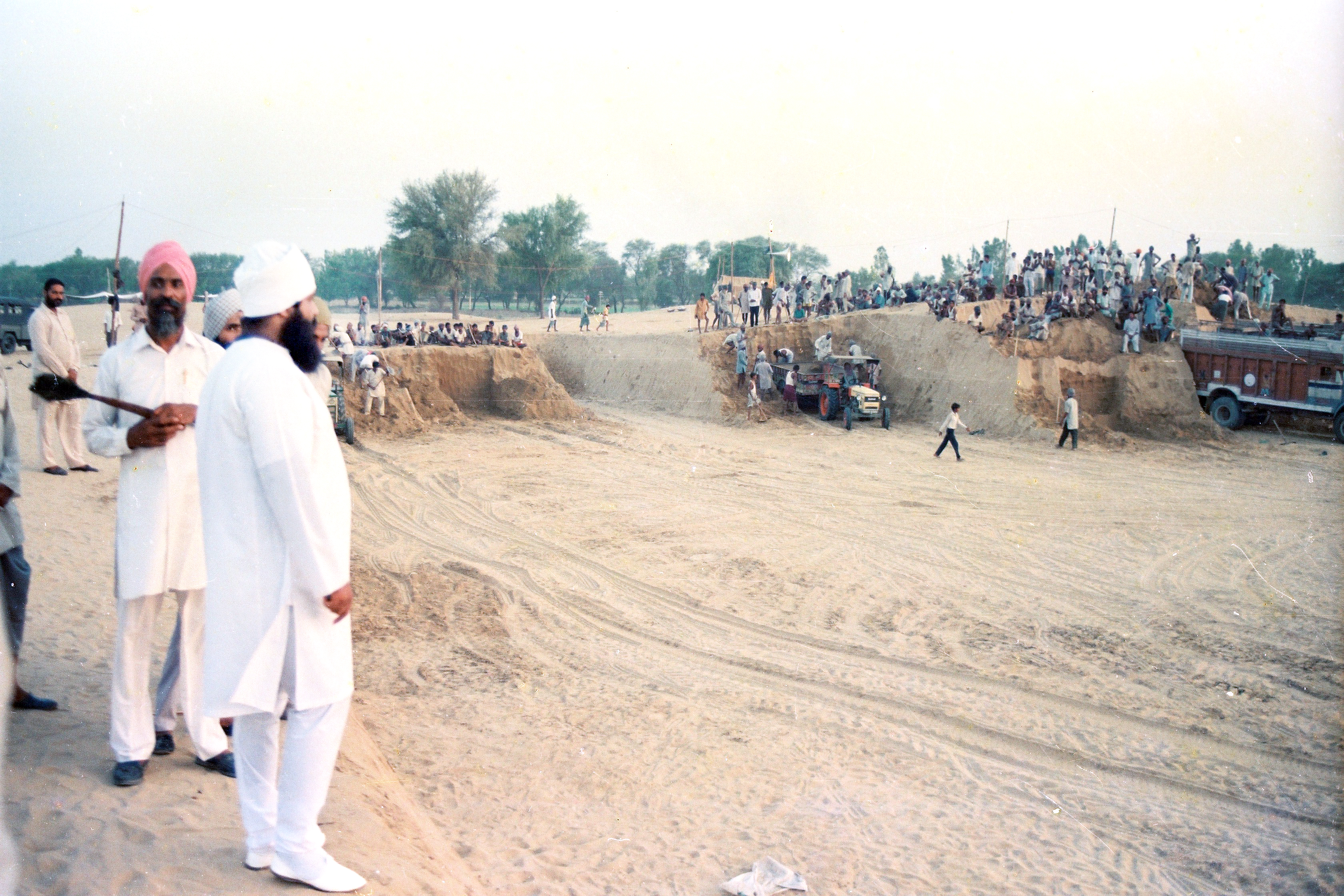 When the construction started, the problem of water was to be solved as the place was on outskirts of Sirsa city. The drinking water used to be brought from the city whereas for construction purpose, water was taken from a stream flowing adjacent to ashram. Bricks were made in ashram itself. At Night, mud bricks were prepared and during the daytime were dried into concrete bricks. Each & every process of construction whether small or big was done under the guidance of His Holiness Mastana Ji Maharaj. His Holiness HIMSELF directed on the architecture of ashram. Initially a hut was constructed, adjoining to which a cave was built with a ceiling equal to the height of the hut. The entrance of the cave was from inside the hut. Even the rooms built were so small that one can only sit there, aiming to help devotees meditate there without lying down. Thorny shrubs were cut and piled into a tall and strong fence around the ashram. Thus, the ashram was ready to be served for human being’s emancipation. 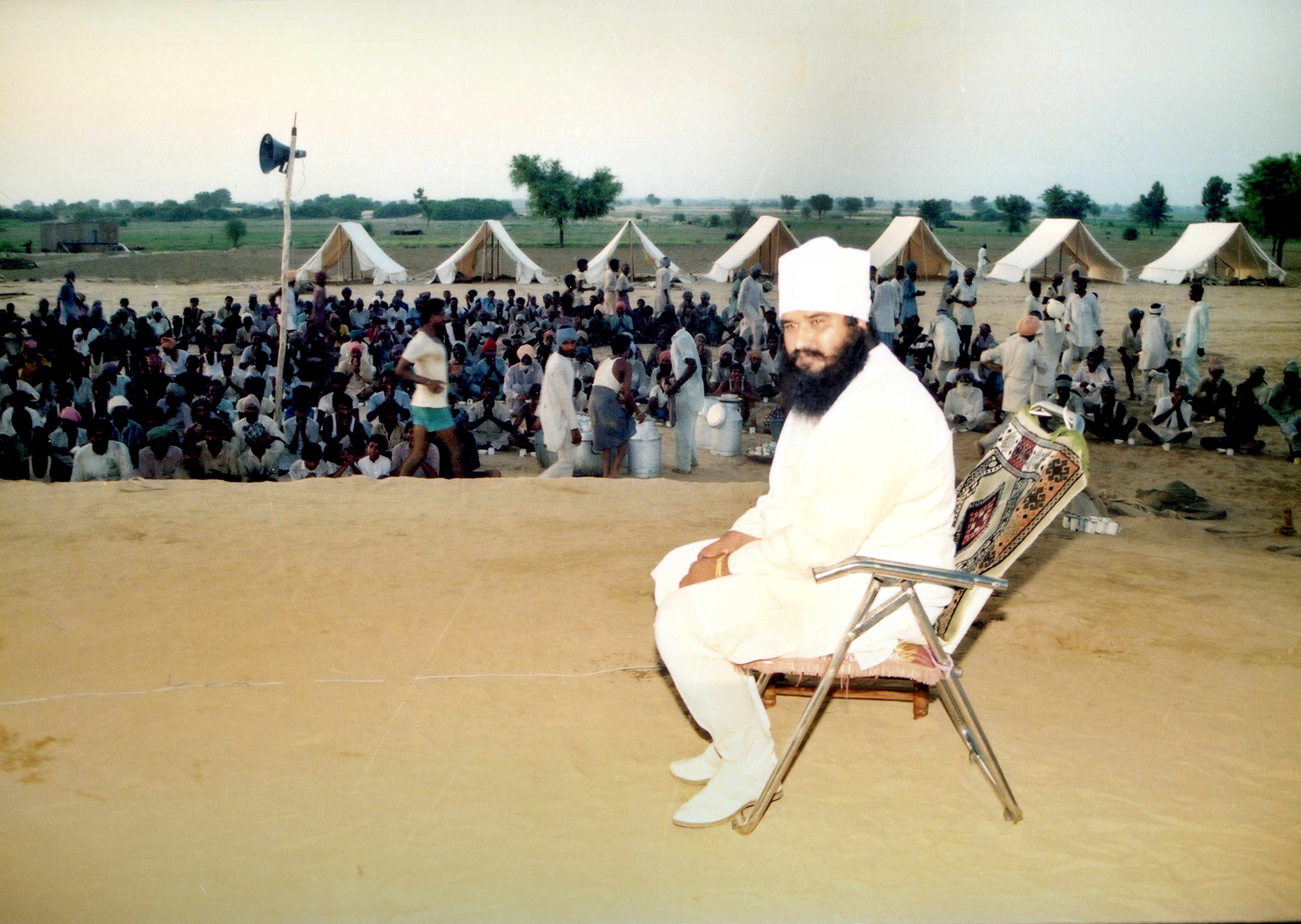 For naming the ashram then, His Holiness suggested three names: Roohani College (Spiritual College), Chetan Kutiya (Hut of Consciousness), and Sacha Sauda (The True Deal) and later on, with the consent of all present devotees “Dera Sacha Sauda” was finalized. Defining its meaning, Revered Mastana Ji stated that it is not a new religion or new section of the society. It is a place in confluence of all religions where the true deal takes place. Truth in both the worlds is only one that is the Supreme Power, the Almighty and the deal is to chant the God’s Naam (words) in lieu of throwing away all your sins without any cost. HIS Holiness, then firmly stated about Dera Sacha Sauda, “There’s nothing that’s going to diminish here. The Treasure of God’s Name will never end in both the worlds. East will bow here, West will bow here, the rising one will bow here, the descending one will bow here; the whole world will bow.”

Since, 29th April, 1948 the ashram has seen many changes in its architecture and the count of devotees manifolding into lacs & crores. Present Guru Ji Revered Saint Gurmeet Ram Rahim Singh Ji Insan, in HIS own unique ways, continuously work on beautifying the ashram, besides this, what makes it the most religious and spiritual place in this world is the sense of peace and contentment one feels here.