In the Nuwakot area of Nepal, Saint Gurmeet Ram Rahim Singh Ji Insan patched up Shree Shahid Jagat Prakash Jung Shah Sanskrit optional school (Devighat) and did the initiation on Thursday by tying the strip hitch. On this event, school's head and the occupants of Nuwakot demonstrated an offer of thanksgiving and gave over a letter of honor to Guru ji. Then again, recreation of Shree Ranbhuvaneshwari optional secondary school and its rooms is being finished with extraordinary excitement. 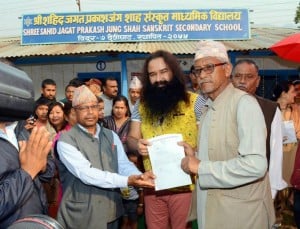 The representative of Dera Sacha Sauda told us that the restoration of two schools was done under the heavenly direction of respected Guru Ji himself and one of the school is as of now finished. They likewise revealed to us that the volunteers of Shah Satnam Ji Green S government assistance power wing redid Shree Shahid Jagat Prakash Jung Shah Sanskrit auxiliary school and achieved this assignment by completing two days of tenacious difficult work. All the annihilated dividers of the schools are reproduced and white washed, and separated from that lab rooms, chalkboards including work areas and other vital materials are planned. They disclosed to us that, 15 workmanship workers, 10-10 woodworkers and ironworkers each and other 150 volunteers helped them to achieve this administration work.

Then again, the recreation of Shree Ranbhuvaneshwari auxiliary secondary school is going to wrap up. In this administration work, about in excess of 400 volunteers are resolutely attempting to finish this venture and adored Guru Ji will do the introduction when it gets concluded. It is huge that the school was annihilated on 25th April during the seismic tremor and this decimation is causing an insufficient effect on the investigations of the kids.

On the initiation service of school, venerated Guru Ji urged that seismic tremor drove 80percent of the individuals entanglement in the Nuwakot region. Casualties are agreed alleviation materials, tents and apportion. Our primary intention is to give help and solace to greatest number of casualties who are stuck over yonder. Schools which are annihilated in this mishap will be remade at the earliest opportunity for the eventual fate of the apparent multitude of youngsters. Aside from this, India-Nepal maitri building will likewise be remodeled.