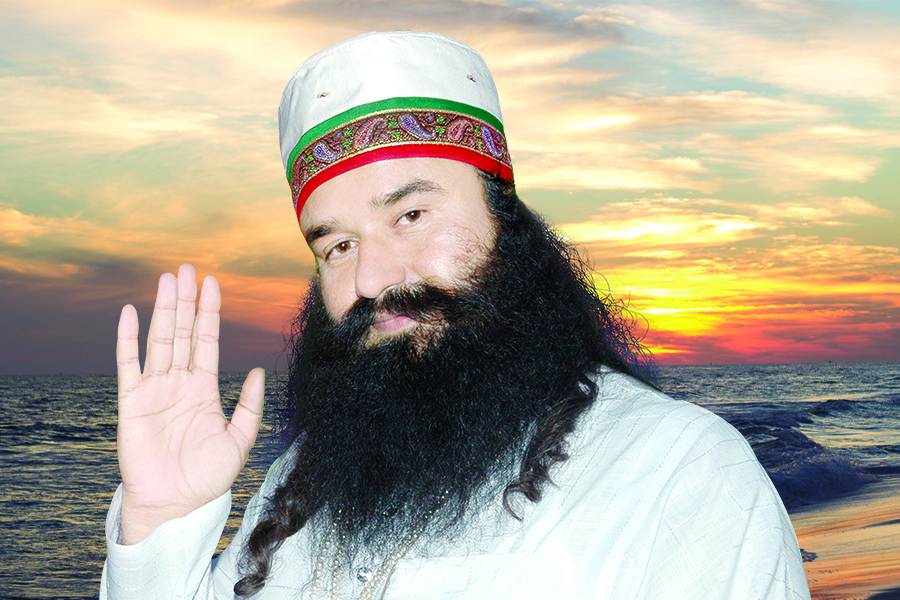 Revered Father : Sardar Magghar Singh Ji
A landlord and the head of his village.

The Prophecy of January 1960

Shah Mastana Ji in his last Satsang (spiritual discourse) of January 1960 had repeatedly prophesized, “Exactly after seven years, I will come again in the form of the third body (the Third Master)”.

Often people take the words of saints lightly. It is only when they come true do they realize the significance of those Vachans (words/promises).

And the same happened with Shah Mastana Ji as well. His disciples didn’t understand the significance of his words. Only when Revered Saint Dr. Gurmeet Ram Rahim Singh Ji Insan incarnated on 15th August 1967, exactly after the completion of the said seven years, did the disciples understand his prophecy.

Being the only child of his parents, he was the favorite of everybody in his family.

From a very tender age, his deeds hinted at the fact that he wasn’t an ordinary child. Soon, his parents realized that he wasn’t merely a child but the image of the Lord. And thus, they never hurt him physically or verbally.

The natives of the land also learned about this special child.

His Holiness was always kind and helping the child. He used to help the poor and needy financially and in every way possible for him. These qualities he carried into his adulthood and are reflected in his personality even today.

During years of his education, His Holiness performed excellently in academics, sports, and co-curricular activities. He also did whatever he did with great dedication and confidence.

At a very young age of just seven, His Holiness was bestowed with the Naam from Param Pita Shah Satnam Singh Ji Maharaj at Dera Sacha Sauda, Sirsa. And this was how one Master Saint found the next in the lineage.

Param Pita Shah Satnam Singh Ji Maharaj invited his disciples from all over the country and conducted a grand Satsang where His Holiness declared Revered Saint Dr. Gurmeet Ram Rahim Singh Ji Insan as the successor to the divine throne.

In this formal ceremony, Shah Satnam Singh Ji Maharaj bestowed spiritual wealth to Pitaji and handed him the charge of the Dera.

This date is not only a milestone in the history of the Dera Sacha Sauda but also an important date for all mankind. It was on this date, that Revered Pitaji left his family at a young age of 23 and sacrificed himself to the cause of humanity.

Since then Revered Pitaji has worked tirelessly to spread the divine message and blessings of our Param Guru, throughout the world.

Saint Dr. Gurmeet Ram Rahim Singh Ji Insan drove over 60 million souls via the Naam/Gurumantra, on the path of God-realization.

He can be credited with the fact that he has transformed several atheists into disciples of spirituality. His Holiness has also contributed to motivating millions of people to perform selfless service to mankind.

Revered Pitaji has helped millions of people understand the presence and importance of God and how he is present within all of us, and not on mountains or forests as is conventionally taught. This is indeed a big landmark in the history of mankind.

“If a disciple makes a request for the fulfillment of a reasonable desire to the Satguru by meditating in the Braham Moohrat, ie. 2-5 AM, that request will directly reach the Satguru and will definitely be accepted by him.”

Which means, “Neither have I done anything nor can I ever do anything? It is Shah Satnam Ji Maharaj who does everything and who will do whatever is done in the future.”

His Holiness has built more than a dozen ashrams in the states of:

Revered Pitaji lives a disciplined life to perform extra-ordinary hard work because of his supreme love for humanity. His busy schedule is a witness to this fact. His life proves below proverbs to be true:

‘Service to mankind is service to God’

‘Love is God and God is Love’

Revered Pitaji has also composed hundreds of hymns and has written several books.

His Holiness is the Savior of Humanity initiated 147 activities of social welfare for the well-being of nature as well as mankind. (https://www.derasachasauda.org/humanitarian-works/)

In order to facilitate the execution of these humanitarian activities smoothly and successfully, the states have been divided into functional blocks. In these blocks, followers of Dera Sacha Sauda themselves manage all the welfare and humanitarian projects at their level including providing free medical treatment to the needy, constructing houses for the poor, helping financially in marriages of destitute girls, donating organs including blood and eyes after death, solving cases of disputes without litigation, etc.

Over 70,000 followers are already members of this force.

Inspired by Revered Pitaji, these members have vowed to serve humanity during natural disasters, regardless of which part of the world they need to go to.

The Naam (Method of Meditation)

Revered Guru Ji (Saint Dr. Gurmeet Ram Rahim Singh Ji Insan), the chief of Dera Sacha Sauda, teaches the method of meditation to disciples from all parts of the world including (but not limited to): USA, Canada, UAE, Australia, UK, Etc…

It is only because of the Revered Guru Ji that the Dera is flourishing the way it is today.