Dera Sacha Sauda cleaned the historical Tonk city of Rajasthan in its 27th Mega Cleanliness Campaign under the banner "Ho Prithvi Saaf, Mite Rog Abhishaap" on Monday, 14th October 2013. Around 70,000 Dera Sacha Sauda volunteers and members of Shah Satnam Ji Green 'S' Welfare Force Wing participated in this mega drive and with their sincere dedication towards the service cleaned the whole city in mere one and half hours. This was something unbelievable and never happened before scene for the local residents which made them stand open-eyed. The campaign's influence on local residents was so intense that they not only appreciated volunteers but vowed to maintain cleanliness in future by signing on the pledge forms. The whole Tonk was divided into 3 zones and allocated to volunteers from different states to facilitate successful execution of cleanliness campaign.

The Mega Cleanliness Campaign was commenced from Ghanta Ghar Chowk by Revered Saint Gurmeet Ram Rahim Singh Ji Insan. Revered Guru Ji in accordance to the Dera Sacha Sauda's holy custom of inauguration, released a big cluster of gas-filled balloons carrying the slogan of campaign "Ho prithvi saaf, mite rog abhishap" in the air and swept a portion of dirty area with a broom himself. Revered Guru Ji then blessed all the volunteers with his divine benediction and waved a unique flag designed specially for the campaign (in concurrence to all religions and including symbolic colors of national flag) as a commandment to all for commencing the campaign 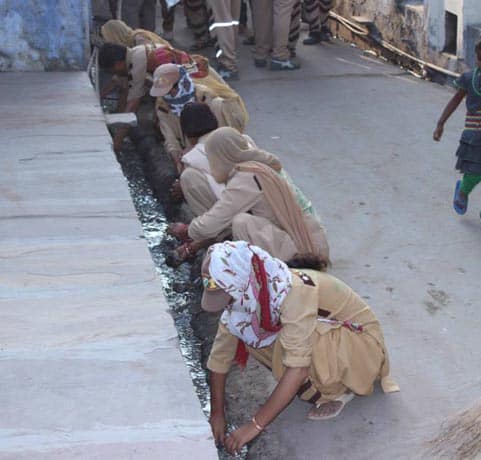 Blessing the volunteers with his divine benevolence and pious words, Revered Guru Ji said, "Festivals of joy and happy moments should be celebrated by performing good deeds. Rendering selfless service is an incredible task. Moving on the path for other's welfare is something impossible in this Dark Age, but blessed are those and their parents who come forward to serve others selflessly. Such people shall surely deserve Almighty's grace."

Explaining the importance of cleanliness as mentioned in religions, His Holiness said, "Cleanliness in surroundings is of utmost importance. Clean surroundings influence remembrance of the Lord in one's self and mind is freed of evil thoughts and vices. A human will take humanity forward if his vicinity is clean. External cleanliness keeps vices away."

Spreading the message of maintaining cleanliness in future, Revered Guru Ji advised residents of Tonk not to litter squalor in surroundings. The filth all around is harmful for us whereas it will harm our future generations also. If we start keeping some of the area surrounding our homes clean, the whole area will remain cleaner. Revered Guru Ji further referring to those who generally spit or throw cigarettes on road, uttered, "If that spit or cigarette falls on someone, he curses you for that. If a biker dies or gets handicapped by falling on a thrown banana peel, your simple mistake becomes his life's biggest pain and you unknowingly take that sin upon yourself. The polythene thrown by you sometimes becomes the reason of death of stray cattle." 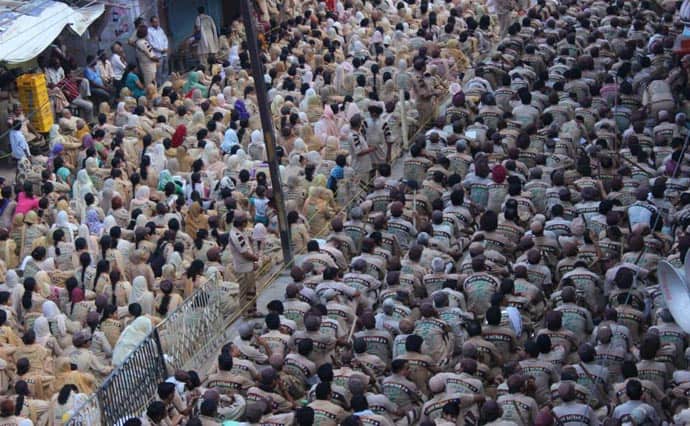 On this occasion, Mr. Himmat Singh, SDM; Mohammed Ajmal, Chairperson Municipal Council; Hari Bhajan Gujjar, Vice-Chairperson Municipal Council, Rohit Chaudhary, Commissioner and many other dignitaries attended the inauguration of Mega Cleanliness Campaign. Everyone sincerely applauded this magnificent effort of Dera Sacha Sauda to spread cleanliness around the world. Mohd. Ajmal paid heartfelt thanks to Revered Guru Ji for initiating these Mega Cleanliness Campaigns not only in Rajasthan but in whole nation. He requested residents of Tonk to take this campaign as a learning and must throw garbage on time so that it is not littered in surroundings. He further affirmed of providing 18 tractors, 3 JCB machines and other cleanliness equipments for this campaign.