The campaign was organized with an objective to make local residents aware about the importance of cleanliness and the health benefits associated with it. Revered Guru Ji has initiated 138 activities towards the welfare of mankind, one amongst them is to conduct cleanliness campaigns to make earth clean and to spread awareness on importance of cleanliness. Under this welfare activity, 27 Mega Cleanliness Campaigns have been organized in several cities of India. The same is expanded globally by the devotees residing outside India by carrying such campaigns in their respective states and countries. 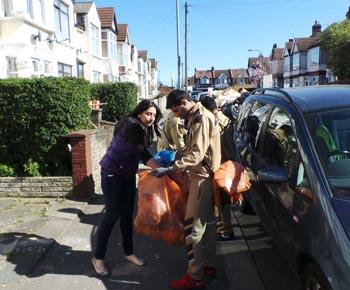 During the Ilford Cleanliness Campaign, over 45 volunteers participated including ladies and young mothers who carried their babies alongside in pram. Starting at 11 AM, the campaign continued for 3 hours in which an area of 19 long streets and its vicinity was included.

The volunteers collected more than 300 large bin bags of garbage which took the residents by surprise. They were humbled to see the amount of filth they were living in.

Adding up to their amazement was the fact that people who are not even the native residents of this place but came from far off land of India to live here, are rendering such service for their welfare. The residents who witnessed the whole campaign were spellbound by the selfless spirit of volunteers for this humanitarian cause. Also, 27 local residents signed the pledge forms to keep their surroundings clean. This too is a huge success as previously only 7 or 8 residents used to take the pledge.

The event was organized by the support of the local Councilor of Ilford, Mr. Russell Ward. He was very happy with the success of this event and wished to carry it out on a regular basis.He expressed his gratitude to Revered Saint Gurmeet Ram Rahim Singh Ji Insan for initiating such welfare activities and asserted to provide all kind of support in future also for such humanitarian activities.