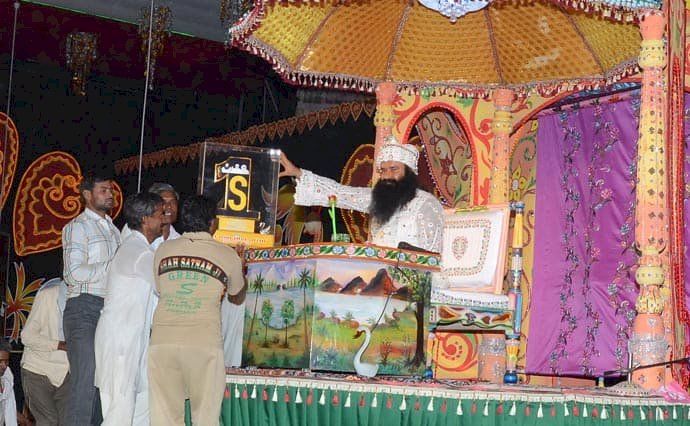 Devotees imbue in the color of happiness on Divine Celebrations

Monday night brought an incredible gift of happiness for devotees of Dera Sacha Sauda. This was the occasion of 65th Foundation Day and 6th Jaam-e-Insaan Anniversary. There were grand celebrations at Shah Satnam Ji Dham for the same. Scores of followers reached over there to get bountiful of blessings and happiness from His Eminence Saint Gurmeet Ram Rahim Singh Ji Insan.

On the holy occasion of Foundation Day of Dera Sacha Sauda, the confluence of all religions, Revered Guruji imparted Glorious method of meditation to 20,490 seekers and administered them to vow to leave every kind of intoxication, non-vegetarianism & other vices and to move on the path of welfare. Besides, thousands of people had had Jaam-e-Insaan (the spiritual nectar). 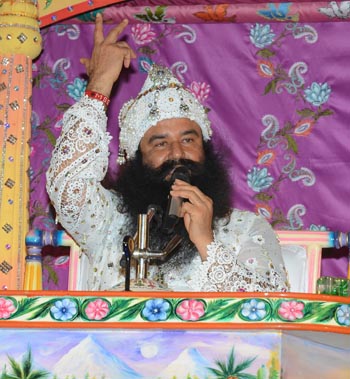 On the occasion, His Holiness Guruji said, "Beparwah Shah Mastana Ji Maharaj had laid the foundation of this holy organization on April 29, 1948. And, Beparawah Ji let the 'Jaam-e-Insaan' to be started on the same pious day and started the confluence of all religions. Everyone used to say that we all are one irrespective of the caste, but His Excellency Beparwah ji proved this by practical implementation. Presently, more than 50 million people hailing from every religion and caste are the true and dedicated followers of Dera Sacha Sauda. Mastana Ji Maharaj has dyed the souls with the hue of divinity that color can never be faded with the power of mann (negative aspect of mind), maya (attachment), lust, anger, egotism etc." Revered Guruji narrated the detailed sermons delivered by Beparwah Ji about the Ashram. Maharaj ji gave very easy and convenient method to have an access to the Almighty, which was never ever seen or heard. With recitation of these words even the sinners can get their sins and bad deeds nullified. One is never deprived of anything if he/she serves the humanity dedicatedly. Today, everyone is known to God's name. Millions of people have involved themselves in Blood donation, Tree Plantation, helping the poor and needy and much more than that. 96 such Humanitarian Activities are being pursued by the Ashram. But some infidels and those who are involved in the business of selling drugs are against it." His Holiness Guruji says, "We are here to make the people away from drugs and intoxicants. The count of such people has increased from thousands to millions. Some people are earning on the name of God but We used to say that God never accepts anything but always gives to everyone. Vices will come to an end with respect to the increase in number of people having God's name. If the herbs would be sold to the medical science all over the world then it would be much more productive and income gaining than its usage in drugs. With the grace of Beparwah Ji there are scores of humanity lovers who are there across the globe. One never remains deprived of anything if he abides by the holy sermons. One must adopt the virtues while giving up the vices. We can not repay the benevolences bestowed by Beparawah ji. HE sermonized regarding trinity." Revered Guruji urged, "Everyone must engage himself dedicatedly in welfare of humanity."

The pioneering blocks in serving the society get honored

His Excellency Guruji awarded the blocks with the trophies for serving the humanity the most. The people making others to quit bad habits and drugs, rendering the services physically, the block standing first position in women upliftment and the students of Shah Satnam Ji Institutes holding first rank in serving the poor and needy were rewarded under this.

Prasad, as per all the religions, was distributed to the followers present over there. Prasad of four different kinds (relating to every religion) with in a single box gave the message of unison. Thousands of volunteers were engaged in serving the Prasad.

On this occasion, one rupee coins, in the form of spiritual treasury, were distributed to the people reached over there from India as well as from abroad. 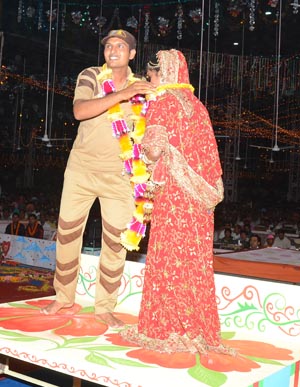 Under the welfare campaign named "Aashiyana" (the Homely Shelter); Revered Guru Ji handed over the keys of 7 'Ready to Move in' homes made by the Dera Sacha Sauda volunteers to very needy families with HIS pious lotus hands.

To the martyrs, His Holiness gave cheques of lacs of Rs. from the welfare corpus of Shah Satnam Ji Green 'S' Welfare Force Wing.

On this occasion His Holinesss Guruji said, "It is ridiculous that widows are not allowed to attend marriages and other such occasions. They should never be discriminated." After the Satsang, His Excellency Guruji pressed the single button controlling all of the showers erected in the pandal from which the pink colour emanated and the devotees were imbued in that. On the occasion, Revered Guruji sung the spiritual hymn, LOV kar lo ji, HUG bhar lo ji"¦" and all people danced a lot in joy.