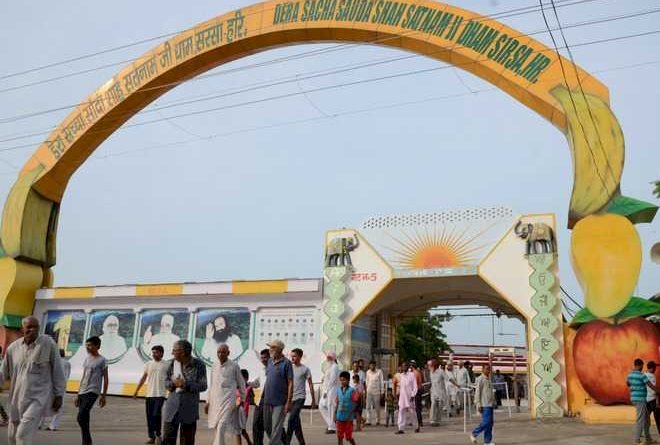 In the 21st century where every person is living a modern western life where people are forgetting “The One” founder of the worlds. Dera Sacha Sauda is a place where people come to meet not only with themselves but also with the ultimate creator and “the true lord”. Dera Sacha Sauda is a pious place situated in Sirsa Haryana which was established by Shah Mastana Ji Maharaj in 1948. Baba Sawan Singh ji the second guru of Radha Soami Satsang Beas was very pleased with the spirituality and fellowship of Mastana Ji he blessed Mastana ji with the name of “Shah Mastana” and send him to Sirsa with a few followers asking him to establish a ashram there and give the message of love and the the true method of meditation to people so that they can find the true lord and happiness.

Truly implies a position of genuine truth. God’s True words or the True Method of Meditation is given without taking any money here. Master of His Holiness Shah Mastana Ji Maharaj, the Revered Saint Sawan Shah Ji Maharaj when satisfied with Mastana Ji’s unceasing affection for his Satguru, grasped Mastana Ji with the awesome intensity of Spirituality. He sent him to these plains of India known as Bagar region to liberate individuals through God’s True Words. Mastana Ji was then given the title of “Emperor of Bagar” by Saint Sawan Shah Ji Maharaj. Consciously, He picked Sirsa as the focal point of Spirituality and put the establishment stone of Dera Sacha Sauda on 29th April 1948. His Holiness showed the Method of Meditation for a long time to a huge number of searchers and urged them to surrender bad deeds and live a fair living by doing hard work through difficulties. Shah Mastana Ji Maharaj likewise settled at any rate twelve extra ashrams in the areas of Haryana, Uttar Pradesh, Punjab, Rajasthan, Delhi and so on. He attempted to shower his celestial blessings far and wide.

His Holiness Param Pita Shah Satnam Ji resurrected himself into another younger body of present Guru Ji Saint Dr. Gurmeet Ram Rahim Singh Ji Insan and gave him his Divine Light. His Holiness Param Pita Ji told to the entire Sadh Sangat, and certified, “We were, We are and We will” be obviously referencing that a similar divine power which began working with Revered Shah Mastana Ji Maharaj is as yet working and will continue working as Hazoor Maharaj Ji for the betterment of humankind. Today, the sapling which was planted by Shah Mastana Ji Maharaj, sustained by Param Pita ji, and given over to Hazoor Maharaj Ji, has developed into an immense tree with more than 5 million followers and many branches. Hazoor Maharaj Ji has helped millions of individuals dispose of their sins by giving them Method of Meditation.

Additionally, Revered Guru Ji is a genuine compassionate person on the most fundamental level! He has started 134 helpful exercises for the government assistance of a wide range of living creatures including greenery, fauna, and people. As per Him, each living being is an offspring of GOD and to serve GOD one must serve his Children. The wonders which occurred through his compassionate works earned the Dera Sacha Sauda Sirsa the acknowledgement of Guinness Book of World Records (not once, however multiple times) not only nationally but worldwide too. Lovable Hazoor Maharaj Ji has guided the Dera with His Holy direction and administration in the way towards Spirituality and Humanity.