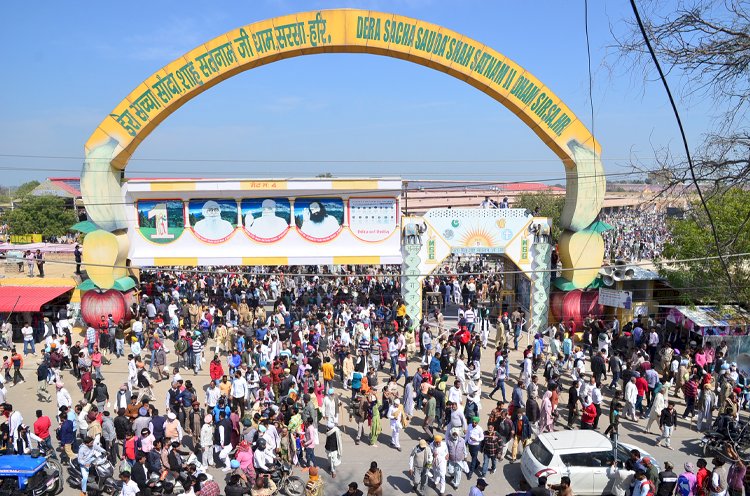 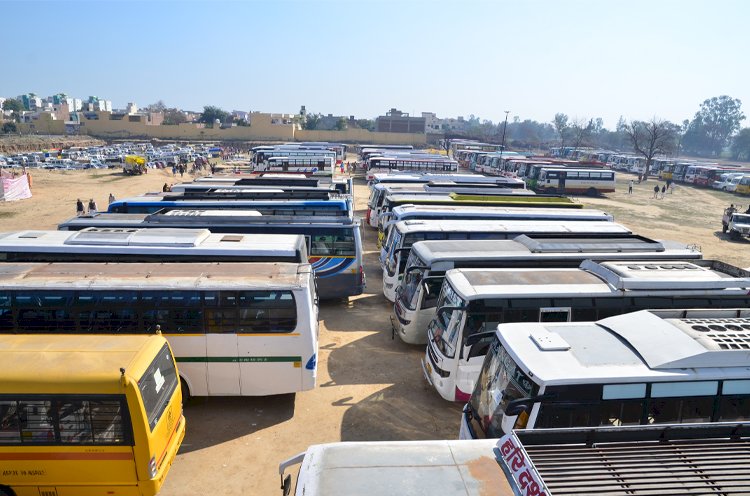 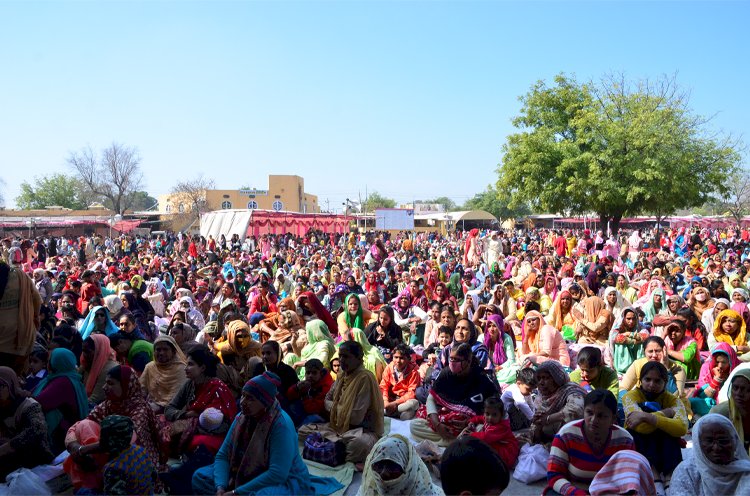 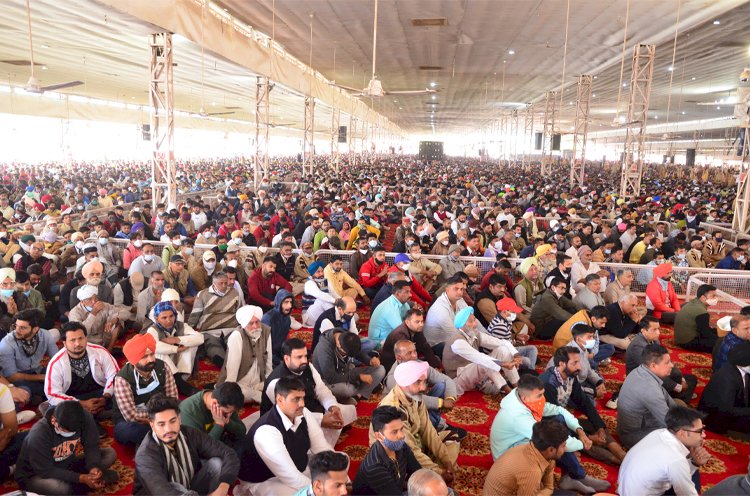 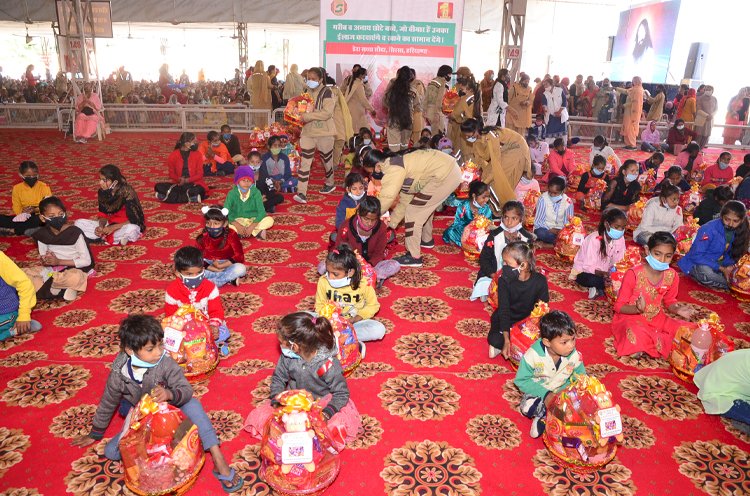 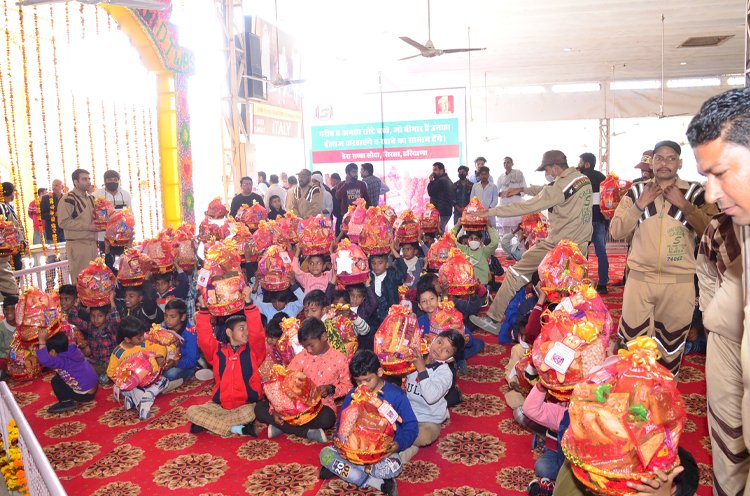 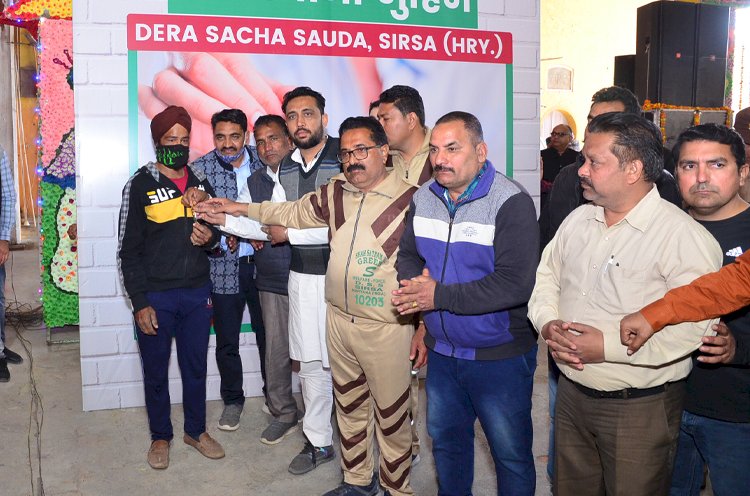 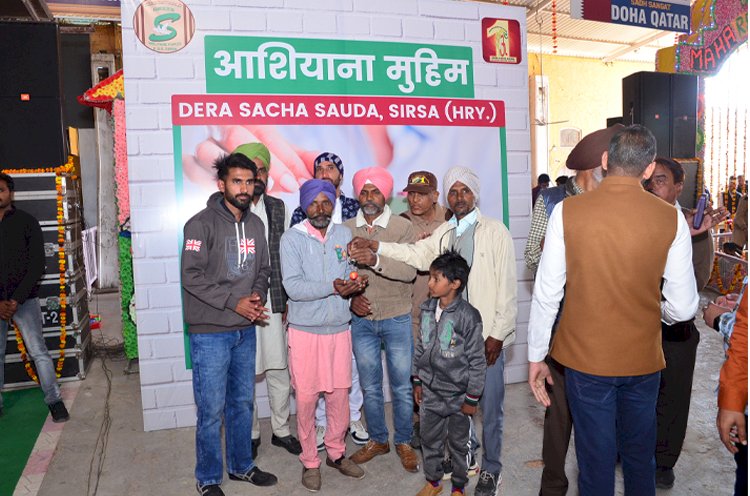 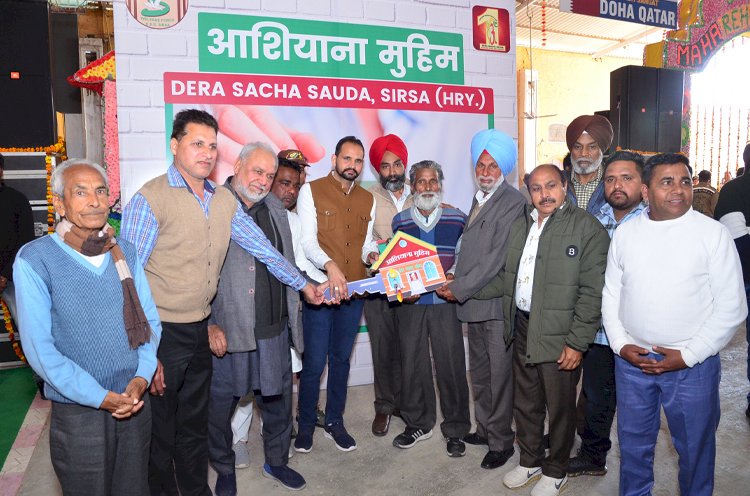 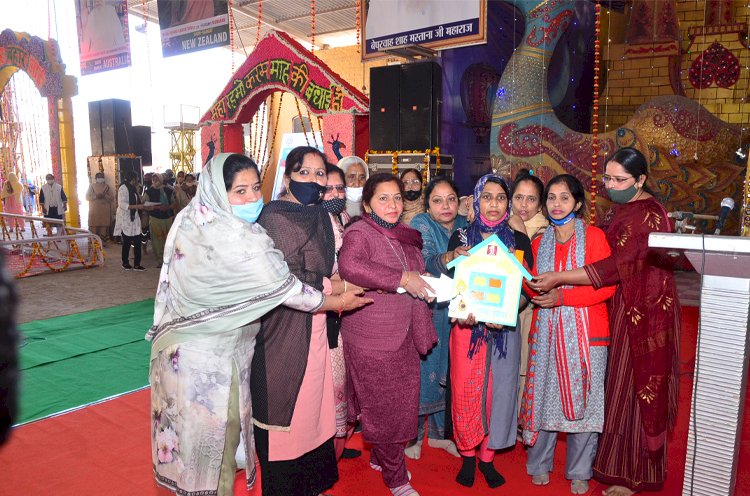 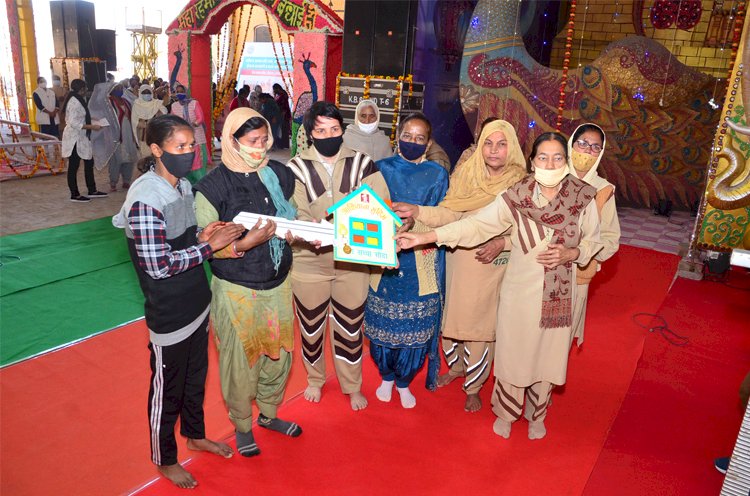 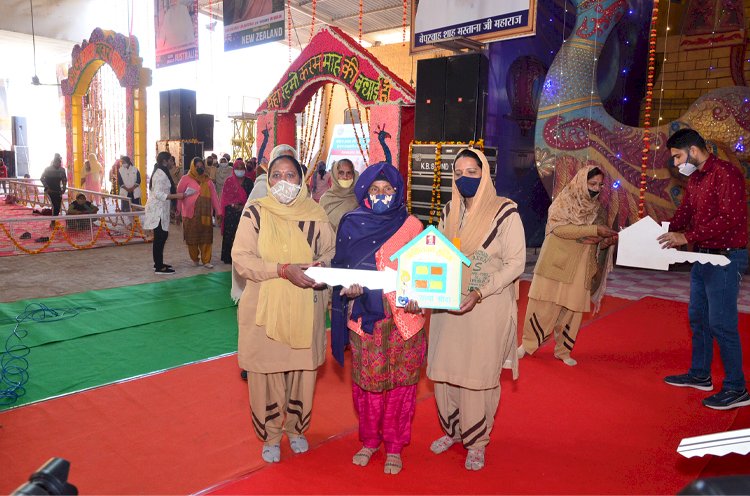 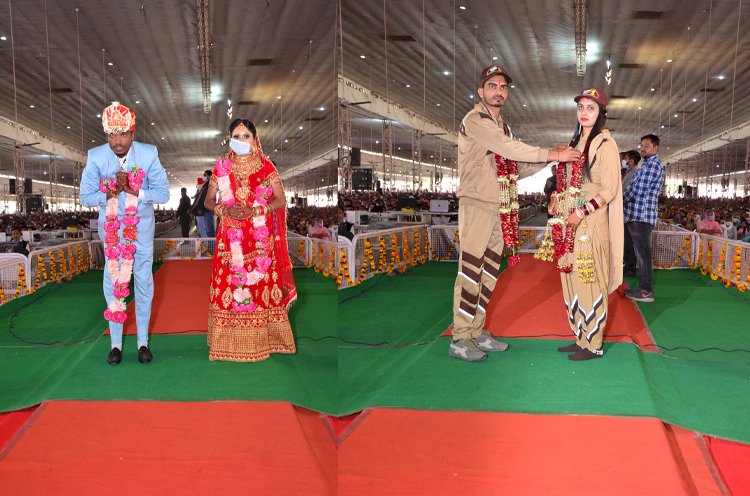 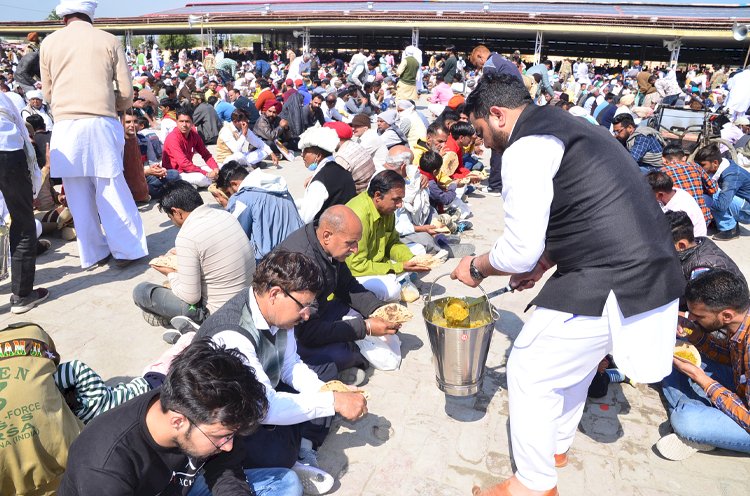 February 28 is the day of huge prominence in the history of Dera Sacha Sauda. This day marked the Royal Coronation of Revered Shah Satnam Singh Ji Maharaj when Sai Shah Mastana Ji revealed ‘Satnami’ power before the whole world. The garden of spirituality is blossoming in its full swing with the grace of His Holiness. He laid the pillar of spirituality and made everyone realize their prime purpose.

A guru holds a special place in everyone’s life. He ignites spiritual and mental awareness by imparting teachings and guidance to the disciples. Revered Shah Satnam Singh Ji Maharaj made all spiritually inclined and blessed all with immense delight. Being the guardian of the whole mankind, He personified the best conduct and shaped up the society in the right mould. His Holiness set the pillars of spirituality and humanity. Thereby, lakhs of people got connected with the Almighty and realized the true purpose of life.

This year 62nd Maha Rehmo Karam Day is celebrated by Dera Sacha Sauda disciples with great pomp. The spiritual congregation held at the premises was telecasted live and disciples across the world became part of it.

Shah Satnam Singh Ji Maharaj was ardent of God since childhood. He used to attend spiritual congregations of saints and sages. One day, when He attended the Satsang (spiritual congregation) of Sai Mastana Ji, He realized that He finally got the true master who can teach the way to salvation. His Holiness attended many spiritual congregations but every time, Sai Mastana Ji declined to bestow Him the Method of Meditation by saying that when the right time will arrive, we will especially call you and bless you with holy Naam Shabad. Till that time, keep on attending the Satsangs and negative power will never harm you in any way.

Though it was a clear indication, many didn’t get the meaning of these divine words of Sai Ji. However, it’s rightly said that it’s not easy to understand the thoughts, words, and actions of a true saint. Whatever He does or performs is a big mystery that can only be solved at the right time.

“Those are the Footprints of Supreme Power!!”

As said earlier, it's not easy to understand the reason behind every word or action of a true saint, this incident correlates the same. The magical event of 28th February cast its shadow before, but it was not easy for all to discern the meaning and reason behind every word of Sai Ji. One day when Sai Ji was moving to a place then He noticed some footprints on the sand. Sai Ji then said the divine words, “Those are the footprints of the Supreme Power Himself.” The followers were startled once and said that these footprints are of Harbans Singh Ji of this village. However, disguising the real meaning, Sai Ji said that ‘We don’t know about this. But these footprints are sure of the Almighty.”

The spiritual hierarchy is pre-decided by the Almighty, it’s not decided by common people. At the right time, that power needs to be revealed before the world, to carry on the divine purpose. With the holy orders of Almighty, Sai Ji revealed Shah Satnam Singh Ji Maharaj as the second spiritual master.

Sai Mastana Ji Maharaj didn’t leave any stone unturned in celebrations of this divine day. On 28th February 1960, something unusual and extraordinary was happening that no one even thought about. Besides the disciples, all local residents were startled by watching and experiencing that divine moment. The splendour of the coronation was a beautiful sight to behold. The preparations were started a couple of days before this holy day.

An open jeep to carry Shah Satnam Ji Maharaj throughout the city was decorated lavishly. A beautiful chair was set in that, which was adorned with flowers. All the disciples were eagerly and enthusiastically beholding the whole magical vista but had no idea about what will happen next. Then Sai Ji called Revered Shah Satnam Singh Ji Maharaj, put big garlands of money from neck to toes on His Holiness, and make Him comfortably sit on the pious chair. Sai Ji addressed all, “Shah Satnam Ji is very courageous. He has followed each word and sermon by heart. Words fall short to praise Him. He has done sacrifice amazingly for us. We have chosen Him as our heir and made Him Almighty. Go and announce in every street and area that Shah Satnam Ji has given commendable sacrifices and We have chosen Him the next successor of Dera Sacha Sauda. Even every child must get this holy news that Sardar Harbans Singh Ji is now Sardar Satnam Singh Ji, the Almighty Himself.”

With great pomp, the whole crowd marched towards Sirsa, Haryana. The grand roadshow was conducted. Sat on the royal chair Revered Shah Satnam Singh Ji Maharaj was looking marvellous. Everyone who was having His holy sight was admiring the divine charisma in their own words. Uncountable disciples were accompanying His Holiness and reciting the holy slogan ‘Dhan Dhan Satguru Tera Hi Aasra’ loudly. Everyone was elated by having sight of His Holiness.

The whole cosmos was filled with divine colours and with massive celebrations, disciples dancing on dhol beats returned to Shah Mastana Ji Dham, Ashram around 4 pm. The creator of these divine moments, Sai Mastana Ji was eagerly waiting for them. Sai Ji blessed every single disciple who was involved in that divine celebrations and accompanied Shah Satnam Ji throughout the city. Sai Ji was overjoyed and greatly delighted in disclosing the divine persona before the world in the face of Shah Satnam Singh Ji Maharaj. The radiance of His face was filling every heart with euphoria and love.

The disciples were collecting these holy memories in their hearts. This never-seen-before vista of beholding two spiritual powers together was beyond their imagination. Sai Ji handed over all the spiritual powers and wealth of both the worlds to Revered Shah Satnam Singh Ji Maharaj. Every beholder was feeling pride in experiencing that divine moment with their eyes & heart!

Those disciples were so fortunate who got the chance to witness that divine moment and grab timeless happiness. After the divine coronation, Sai Mastana Ji changed the name of His Holiness. Earlier it was, Sardar Harbans Singh Ji and later on, Sai Ji changed it to Shah Satnam Singh Ji. Sai Ji cleared the meaning by saying, “Satnam is the Supreme Power Almighty, who controls the whole universe.”

Sai Ji bestowed upon the entire spiritual powers to Shah Satnam Singh Ji Maharaj. Sai Ji was so elated and vigorous at that moment. While addressing the disciples Sai Ji said, “The people of the whole world died while chanting Satnam but they didn’t get Him. He is that Satnam! With His holy support, the whole universe and all galaxies are running properly. With the approval of Sawan Shah Ji, we have brought Him before you all from the heavenly abode.”

In this way, with immortal words, Sai Ji revealed the divine paranormal charisma in the form of Shah Satnam Singh Ji Maharaj. Sai Ji instructed all the devotees that several people want to become Guru after Him but everyone must remain aware. Stay always firm and loyal to Shah Satnam Ji otherwise, you will go to hell. Whether you trust or not, we have made Satnam Ji as Almighty. Those who follow His sermons will stay happy & get everything, otherwise will go to hell.”

The true saints take birth to ignite spirituality in every heart. Their purpose of life, every action, and thought is for mankind. Recusing all sorts of discriminations prevalent in the society at that time, His Holiness taught the lessons of peace and love to all. It was the time when people used to differentiate others on the basis of caste, religion, creed, gender, language, etc. The rigidness and stereotyping made them live in strict boundaries. His Holiness removed these boundaries and uplift people in spirituality.

In the tenure of Revered Shah Satnam Singh Ji Maharaj, lakhs of people got connected with the Almighty. His Holiness cleared the doubts and myths altogether that a person wearing an orange or a particular coloured robe is not a saint. A saint is one whose every second of life is dedicated to spirituality and humanity. No matter what He wears, His thoughts and actions are solely for the wellbeing of the whole universe.

Shah Satnam Ji wrote 1500 hymns and more than twenty holy books in Punjabi and Hindi languages. These are in quite an impressive and simple language that even a kid can understand the meaning. Lakhs of people got connected with Almighty’s name and left all vices, superstition, and bad habits. There’s no word that can express the benevolence of His Holiness that made uncountable people the real humans by making them realize the true purpose of life.

The complete day of Maha Rehmo Karam was an indelible experience and a great blessing for everyone. As guided and taught by His Holiness, the disciples celebrated it by bringing light to the dark lives of the destitute. They constructed free homes for needy families who can’t afford to have their own homes. Giving a secured roof to the homeless by utilizing their own money, funds, and resources is not a cinch. And, getting it in this selfish world, is unimaginable.

But we are grateful to Guruji whose teachings have weaved our lives and made us realize the real purpose of life. Now humanity is the prime agenda of millions of people, just because of His Holiness. The disciples provided a safe roof to those who were just aspiring of having a home.

Guruji never leaves any stone unturned in inspiring society. Not just sermons, His Holiness set an unequalled example before the society by performing noble acts by Himself. This day turned ultra-blessed as Guruji donated 162 nutritional food kits to the underprivileged. This gesture by His Holiness brought indelible joy to their lives. It's a big example set by Guruji before the world to remove worries and problems from the lives of the destitute.

A Prayer for the World!

As Russia and Ukraine's relationship intensified, a barrage of missile attacks wreaked havoc in the lives of people. The whole world is at a big risk because of this war. However, the true saint always remains tender and His efforts & thoughts are channelized for the worldly peace and wellbeing of all. So out of this kind nature and generosity, His Holiness, Saint Dr. Gurmeet Ram Rahim Singh Ji Insan directed all to pray for world peace. The ardent disciples just wait for the command of their Guru and in the same way, the followers followed the sermons wholeheartedly by preserving silence for two minutes. They meditated and prayed for the whole universe as directed by Guruji. This kind gesture by the true saint is surely a big blessing for the people of the entire globe. We are obliged to His Holiness for this deep care and love for everyone.

We are highly grateful and obliged for every moment that His Holiness blessed us. We pledge to keep every promise and follow each sermon of our Master wholeheartedly.