Dera Sacha Sauda followers and members of Shah Satnam Ji Green 'S' Welfare Force Wing residing in London successfully organized the 3rd Cleanliness Campaign in East Ham, London, UK on Sunday, 27th October 2013, thus, portraying the true picture of service to humanity as per the teachings imparted by Revered Saint Gurmeet Ram Rahim Singh Ji Insan. The campaign was organized with an objective to make local residents aware about the cleanliness required to be maintained in the area. Revered Guru Ji has initiated 138 activities for welfare of mankind amongst which one is to conduct cleanliness campaigns to make earth clean and to spread awareness on importance of cleanliness. Under this welfare activity, 27 Mega Cleanliness Campaigns have been organized in several states of India whereas the devotees residing outside India support the initiative by carrying such activities in their respective states and countries.

During the East Ham cleanliness campaign, over 50 volunteers participated including ladies, expecting mothers and small kids. The campaign started at 11.30 AM and was concluded at 2.00 PM. Volunteers collected about 350 large bin bags of garbage which shocked the people residing in the area as they had never wondered living in such amount of filth. People who viewed the whole campaign were amazed by the selfless spirit of volunteers for this humanitarian cause and nine local residents asserted to keep their surroundings clean by signing the pledge forms. 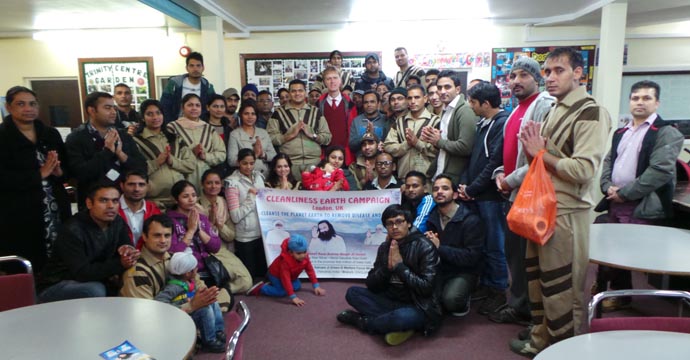 The drive was organized by the support of MP Mr. Stephan Timms who himself visited the place of drive at 2.20 PM and met all the volunteers at Trinity Community Centre. Mr. Timms appreciated the efforts of all the volunteers and shook hands with each and every volunteer to show gratitude for this great effort of humanity. He paid hearty thanks to Revered Guru Ji for initiating such welfare activities and affirmed to provide all kind of support in future also for such kind of humanitarian activities.