To aware the general public regarding sanitation and hygiene in Kaithal City a cleanliness campaign was conducted. And this was the incomparable present for the local residents in the form of cleanliness followed by Satsang. When the whole country was celebrating the festival of Holi, on the same day Dera volunteers reached over here from different states of country as well as from abroad too. Around 4 Lakhs followers participated in this campaign and cleaned up the whole city in merely 2 hours. Everyone was amazed to see the passion among them. 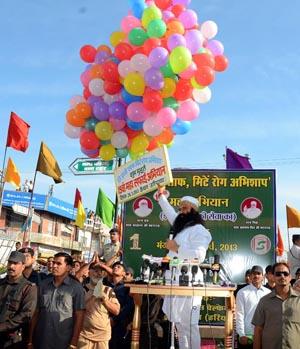 This campaign was inaugurated by Revered Saint Gurmeet Ram Rahim Singh Ji Insan (addressed as "Pitaji" by over 5 million followers presently) by cleaning the specific area and unfurling the green flag. After that, His Excellency Guruji released the balloons indicating the slogans related to cleanliness. Respected Guruji and HIS most adorable mother Mata Nasib Kaur Ji Insan cleaned the specific area to make the earth a better place to stay and motivated others to do the same. And just after getting the commandment from Guruji, Sadh Sangat, which was divided into 5 zones, having the necessary tools, got engaged intently in cleaning and made the whole city neat and clean. Along with cleaning the city, volunteers were also engaged in getting the pledge forms filled up by the local public for cleaning their surroundings and never undergo female feticide. On this occasion, Public Works Minister Randeep Surjevala, MLA Kalayat and former Minister (Rampal Majra), MLA Rania (Krishan Kamboj), Former MLA (Dilluram Bajigar), Former MLA (Rambhaj) and many other dignitaries were also present over there. All of them expressed their heartfelt thanks for cleaning the city.

During the inauguration ceremony, Revered Saint Gurmeet Ram Rahim Singh Ji Insan said, "These campaigns are aimed at making the people aware about cleanliness. Due to garbage and litter many diseases take place; swine flu is one of the examples. If everyone cleans his surroundings then there will not be any disease. With cleanliness, diseases will automatically get a halt. And within clean environment one could be concentrated on divine words much more than the dirty one. In the scriptures also it is mentioned that to become internally pure one is required to clean the surroundings. So, one must follow the same. India is credited with the crown of 'Vishvguru'. It is very painful if one addresses our country as dirty one and it just happens due to carelessness of some people. It is our duty to clean the surroundings so that no one can hurt us by saying it as dirty country.

Volunteers of Shah Satnam Ji Green 'S' Welfare Force Wing are engaged in cleanliness campaign without having any self motive. Even they bear the transportation fare and bring necessary tools with them. Fortunate are the volunteers who have reached here to clean the city. One receives the money for getting any work done for others, same way the people who remain engaged in selfless services, God Almighty bestows immense happiness upon them. Everyone must plant the saplings too along with cleaning the surroundings. Your children may or may not help you but the tree will definitely help you and your generations in future. Volunteers from every field; be it doctor, engineer, teacher or social worker and many others having brooms, spades and other tools with them to participate in this drive.

On answering the question that Are You ready to clean up Yamuna River if the Govt. permits you for the same, His Holiness Guruji said, "With God's grace the volunteers can clean it within one or two days. Moreover, we are ready to clean all the religious places not only the Yamuna River. Just for an estimate if 3 lakhs people reach for cleaning a city and on an average if they have spent only 100 Rs for transportation fare then it becomes 3 crore Rs. The volunteer come up by bearing all the expenses themselves, having food and water even with them. They don't take anything from anyone." 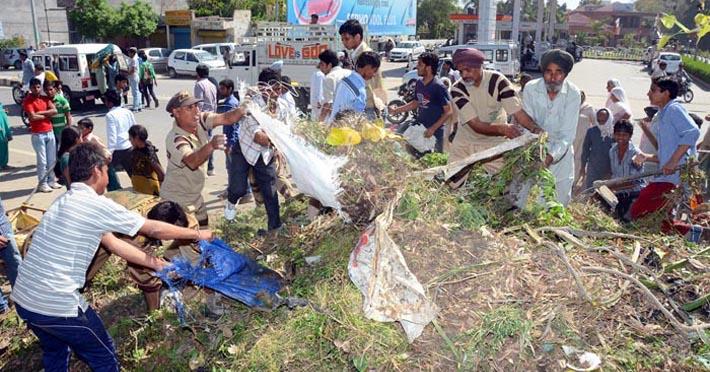 His Excellency Guruji said, "During the cleanliness campaign in Haridwar, thousands tons of garbage were collected from Ganges River from Rishikesh to Rurki. We are ready to dig the drain along with the Ganga River for the sewerage. By doing this, water of holy Ganga River will be cleaned and by visiting more visitors it would be a source of income too.

Many drug dealers are creating conspiracies against Dera because we are conducting anti-drug campaigns. And all the allegations made by them on Dera are just baseless. They are trying to defame the Ashram. On this festival of Holi, volunteers have reached over here to celebrate it by throwing out the garbage of this city.

Under the 'Kul ka Crown' (crown of the dynasty) drive being conducted by Dera volunteers, the bride goes with barat to the broom and brings him at her home and he takes care her parents as his own. Such girls have been nominated as 'Kul ka Crown' and the boys as 'Bhagt Mard Gaji' and 3 such marriages have been solemnized so far. We adopt the prostitutes as our daughters who wish to quit this abhorrent profession and merge into the mainstream society. Those girls are nominated as 'Shubh Devi' (prosperous angels) and the boys coming ahead to marry those girls are named as 'Bhagt Yodha' (Devout Warriors). 17 such marriages have been solemnized so far. More than 1500 volunteers have come up to marry them just on a single exhortation. His Holiness Guruji persuaded such girls to quit this stigmatic profession; the bright future is here for them. Female Feticide is a grave sin; so one must not undergo it. Here, the pledge forms are also being filled up. To end up this menace, 'Shahi Betiyan Basera' (Abode for Royal Daughters) has been established by Dera Sacha Sauda where 22 such daughters are living presently. These girls are bringing laurels for the country in the field of education as well as in sports. Parents are advised to bring up their girls in the same way as they do for their sons. They must not discriminate boys and girls. Girls must also be instilled with passion and self confidence so that they should not consider themselves weak in any way.

The players of Shah Satnam Ji Educational Institutes have been bringing laurels to the country. The girls from these institutes have participated in Asian games Throw Ball, Yoga and Rollar Skating and won Asia cups in these games once, twice and thrice respectively. Dera Sacha Sauda has set 14 Guinness World Records and 8 Asia Records for blood donation, tree plantation and conducting medical camps.

" His Holiness Guruji says, "Our motive is to serve the humanity, not to making the records. All the records are dwarf before the passion and enthusiasm of the followers. Saints always pray for other's well being and God definitely accede to their prayers. It is necessary to have inner-self pure along with the external fitness. And this is possible only with the method of meditation. This is just with the grace of Almighty that scores of people are coming ahead to serve the humanity. Moreover, thousands of people have quit the addiction of drugs by rendering selfless services in the Ashram for 7 days and reciting God's words."

On this occasion, Public Works Minister Randeep Surjevala said, "Everyone in the country is appreciating Dera Sacha Sauda for conducting the campaigns to aware the public. Cleanliness Campaign, Female Feticide Campaign and marrying the consenting ex prostitutes are some of the biggest campaigns after the independence of the Country. Every common man must follow all this. By Dera's cleanliness campaigns in 8 countries people have become more energized." He assured the help from Haryana Govt. during the cleaning of Yamuna River by Dera Sacha Sauda.