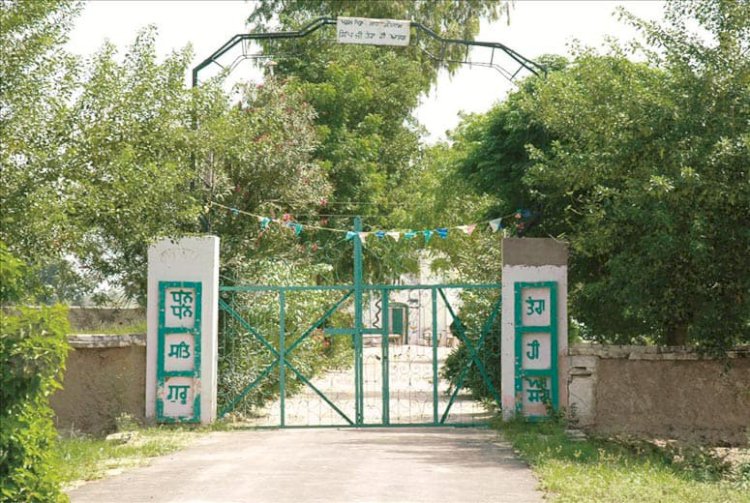 This Ashram is situated at 35 km away from Sirsa, on Sirsa"“Dabwali road. Once Beparawah Mastana Ji Maharaj conducted a Satsang at the holiest place, Shri Jalalana Sahib; then, some devotees along with the representatives of Chormar village implored to Beparawah ji for conducting a Satsang in their village too. On seeing the mutual love and tremendous zeal among the villagers, Beparawah ji acceded to their request and granted a Satsang on the very next day. On the pious arrival of Guruji, all the devotees revealed profuse happiness. His Excellency Guru Ji explicated, "Guru bhakti krna aashika da kamm hai, marda da kamm hai; kayra da nahi". The first step on the path of Divinity is to see an enlightened Saint and have selfless love to each other. Eventually realize the Almighty God with continuous recitation. Sanctified dessert [Laddoo] made up of pure ghee, were distributed among the disciples present there. With Beparwah ji's holy grace that prashad did not finish. His Holiness Beparwah ji sermonized, "Wah bhai wah. Eh ladduu taan mukde hi nahi".

Beparwah ji conducted a Satsang in the night, but there was excessive thundering and lightning. His highness envisaged the sky and said, "Draata hai, aata nahi! i.e. it is just scaring, would not happen". And these words really materialized, as there was not even a drop of rain during the entire Satsang while it seemed that there would be deluging rain. On the next day, Maharaj Ji conducted the Satsang in the premises of Ghukaanvali Ashram. Representatives from Chormar Village reached there and requested Shahanshah ji to establish an Ashram in their village. They already had the acquisition of land and on getting the kind permission from Beparwah ji, they started the construction work with great zeal and enthusiasm.

Beparawh ji stayed in Chormar for 45 days, until the establishment of Ashram. Initially, a Tera-Vaas [sacred abode], verandah and a kitchen were instituted. After that, boundary walls and water reservoir in the form of a diggie were erected. After the accomplishment of this Ashram as per the requirements, Beparwah ji named it as "Sachkhand Dham, Dera Sacha Sauda".

In 1958, Mastana ji Maharaj stayed in Shri jalalana Sahib for 18 days and chosen Param Pita Shah Satnam Singh Ji Maharaj as HIS spiritual successor. During these days, Beparawah ji ordered to demolish the Gadrana and Chormar Ashram and send the entire debris to Shri jalalana Sahib and further to Ghukanvali village, while Param Pitaji was ordered to bring the luggage from Ghukavali to Shri jalalana Sahib. That was a mysterious secret of Beparwah ji and Param Pitaji kept on following the holy sermons happily. On acceding devotees' persistent request, Beparavah Ji granted again to reconstruct the Ashram and built the same under HIS own helmsman ship. An elegant Tera-Vaas, a large hall, few rooms and boundary walls were erected. And Beparawah Ji renamed the newly constructed Ashram as "Dera Sacha Sauda Nirbhaipur Dham", which is presently renowned in the entire area.