Adhering to the teachings of Revered Saint Gurmeet Ram Rahim Singh Ji Insan, Dera Sacha Sauda volunteers and members of Shah Satnam Ji Green 'S' Welfare Force Wing successfully accomplished a Cleanliness Campaign with the message 'Cleanse the Planet Earth, to remove Disease & Curse' at Hackett valley park in Toronto, Canada on April 19, 2014. His Excellency Guru Ji has initiated 138 Humanitarian Activities amongst which one is to conduct cleanliness campaigns and to spread awareness on importance of cleanliness. 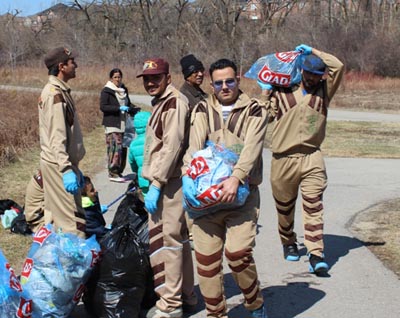 Under this welfare activity, several Mega Cleanliness Campaigns have already been organized in several states of India. Also, the devotees residing outside India support the initiative by carrying out such activities in their respective states and countries.

In a bid to give a fresh look to the Hackett valley park, 32 volunteers including 9 ladies enthusiastically participated in this drive which began at 10:00 am and their devotion and sincere efforts cleaned up the whole park in just two hours. People who viewed the whole campaign were spellbound by the selfless spirit of volunteers and paid thanks to Revered Saint Gurmeet Ram Rahim Singh Ji Insan for being the source of inspiration for such noble cause.

The campaign was organized with an objective to make local residents aware about the importance of cleanliness, hygienic life style and the health benefits associated with it.

It is pertinent to mention here that this park was adopted by the Shah Satnam Ji Green 'S' Welfare Force Wing for 2 years on 12th August 2012 in the presence of officials from City of Brampton and Toronto Region Conservation.