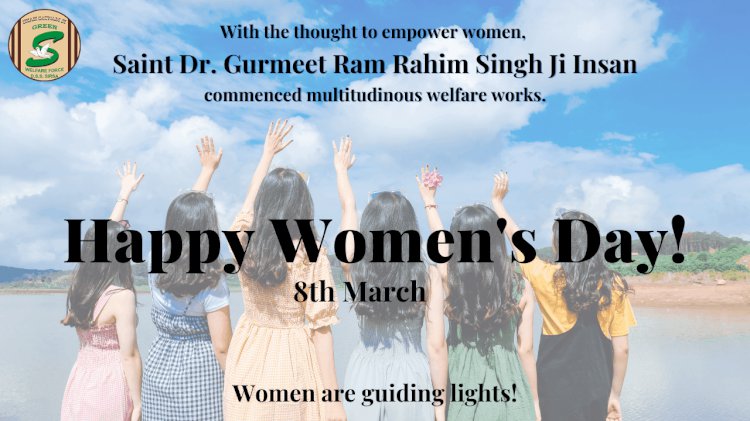 The personification of strength and beauty, a woman marks several contributions in the world. Every year to mark her priceless dedication in almost every sector of society, International Women's Day is celebrated. It's a day to spread awareness about gender equality, women's rights, and their participation in varied areas. However, in almost every sector, a woman is marginalized on many grounds. The reason behind it is the deep-rooted socio-cultural, historical barricades that don't let her flourish in the way she wants. Often in the name of power and resources, she doesn't get what she deserves and ended up in stifles surrounding her. But exceptions exist! Dera Sacha Sauda is the pioneer in humanitarian services, keeps the women's spirit high and empower them in all circumstance. With the sacred guidance of Rev. Saint Dr. Gurmeet Ram Rahim Singh Ji Insan, a plethora of welfare works have been conducted that are giving a boost to women empowerment and they are touching heights in success! Let us have a profound knowledge of all these works! https://www.youtube.com/watch?v=lLK3mgNgEUg

The Theme of International Women's Day!

As the global pandemic hit the world, people recognized the value of a woman in life. Their contribution can't be overlooked. However, this pandemic has widened the gap and raised inequality in many terms. So, this year the International Women's Day is celebrated by keeping the theme, 'Gender Equality' and recognizing the tireless efforts of women in the world. Dera Sacha Sauda's every endeavor brings equality into society. It is striving hard in removing atrocities against women that are wreaking havoc and a big barrier in their progress. A wide array of welfare works has been carried on and that are given below!

Benchmark for Development via Sports

Empowering women via sports and giving them equal opportunities is a remarkable step towards ending gender inequality. It unfolds the latent potential and lets them prosper in every field graciously. Dera Sacha Sauda has provided exemplary assistance in sports and paved the way to the excellence of women on the international levels. It is with the holy backing of Saint Dr. Gurmeet Ram Rahim Singh Ji Insan that they all get proper support and guidance to shine up India's name globally. They all renowned Guruji as 'Papa Coach' who provides them tips to improve focus, get concentration, know deep rules and succeed in every type of sports. It is with endless efforts of Guruji that girls proved themselves in every sports and yogic activity and put a tight slap on the face of a society that never provided them a chance to even participate. Therefore, in each kind of sports such as tennis, roller skating hockey, football, swimming, lawn tennis, volleyball, archery, etc. girls are touching new frontiers. The educational institutes set up at Dera Premises are strengthening the roots by offering them an equal platform to manifest their skills & talent. Without any discrimination, they all are soaring high with impeccable potential and dedication!

The desolating social stigma of having a single girl child keeps parents always demotivated. The never-ending fear of having no support in old age makes them feel discouraged. Also, this becomes one of the prime reasons for female foeticide as patriarchal society disdain daughters in many terms. A male can only run the lineage and that's the age-old ritual, which also has given rise to female foeticide. However, by realizing their pain, Saint Dr. Gurmeet Ram Rahim Singh Ji Insan initiated a new welfare work named 'Crown of the Lineage or Kul Ka Crown'. This initiative breaks the so-called societal norms and allows the girl to take the groom to her home after marriage, and with their name, the family's lineage will be carried forward. The groom follows each of the family's rituals just as the girl does. To such brave-hearted boys who come forward in this regard, Guruji gave the name 'Devout Warriors'. The family accepts him as his own son and provides every responsibility as well as privilege to live in the in-laws' house. This outlandish tradition is giving wings to women who happily live ever after without leaving their parents alone and step ahead towards their betterment. This challenging and powerful solution is bringing down the number of female foeticides and helping women live flourishingly. https://twitter.com/DSSNewsUpdates/status/1368835263460347907?s=20

The sinful acts against women's dignity can't be count in numbers. Dera Sacha Sauda worked in almost every field to put a full stop on these anti-social elements and their attempts so that woman can breathe in the fresh air & think for her. Under such initiatives, several teams have been created that are working to recognize child trafficking which is a big global issue. Moreover, to stop female foeticide, 'Shahi Betiyan Basera' has been created wherein those girls who were supposed to be killed by their parents have been rescued. Guruji has given them His own name and they all are studying in CBSE schools. Guruji has taken their responsibility on such a grand level that they are getting all amenities and touching new heights by achieving milestones in the study, sports, and every field. It seems like it's a tight slap over the faces of those who consider girls as a burden and resort to female foeticide to end up their lives. Another initiative apprehends the plea of prostitutes who wants to come out of it. Girls trapped in the darkness of prostitution who willingly want to come out of it get every support from Dera Sacha Sauda. From medical care to their marriage, every responsibility has been taken by Guruji. Guruji accepted them as their own daughters and gave them the name 'Shubh Devi', the one who brings luck wherever she goes. Guruji provided them a dignified life for which they just dreamt of. Is it a small act? Such an unprecedented example of women's empowerment and equality can't be seen anywhere else. The one who marries Shubh Devi has been given the name 'Bhakt Yodha' the courageous one! Many such girls have successfully left this lousy profession and living a happy life now!

It's just a fraction of the whole picture! Dera Sacha Sauda has been carrying on hundreds of soulful works on a global level that are bringing glory to women at large. Pious Womb, Respect Motherhood, Mother-Child Guardian, The New Morn, Save Womanhood, New Light of Hope, Anticipated Life, Blessings, Spiritual Character, The Bud of Knowledge, Genuine Guidance, and many more works have been carried on to raise their dignity. Now women are enjoying equal status as men in the society and getting equal rights to raise because of Dera Sacha Sauda. It is changing the attitude of people towards women and their rights. People are wholeheartedly accepting these initiatives. It's undoubtedly bringing a revolution in the whole society. In a world full of inequalities, these initiatives are a gateway to a new barrier-free and equal society respecting the right of all! Salute to Guruji for starting such works on a global level that are revamping people's thoughts applaudingly!