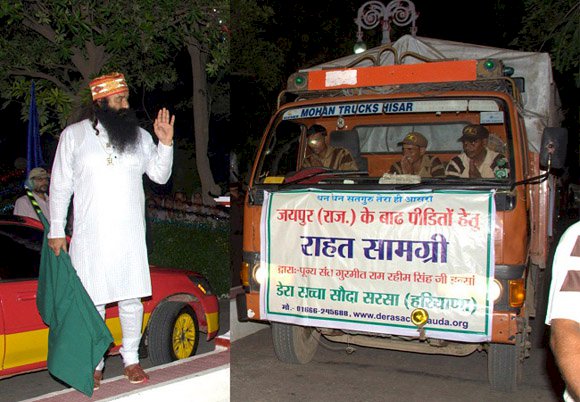 Relief following the flood of Jaipur

With the aim of dedicated selfless services to humanity, the welfare agency named Shah Satnam Ji Green 'S' Welfare Force Wing, has again proved itself as the true savior of lives by helping the flood victims in Jaipur. Three canters loaded with relief material were dispatched by the wing's activists on Monday at 3:00 PM. Most revered Saint Gurmeet Ram Rahim Singh Ji Insan flagged off the relief contingent with many volunteers at 6:00 PM. On this occasion, His Holiness Guruji blessed the volunteers going for the relief operations and said, " The activists of Shah Satnam Ji Green 'S' welfare force wing are always ready to help the victims during the natural calamity or any other distress." Further, His Holiness said, "To help and assist the people in need is the foremost duty of everyone. The heavy rain in Jaipur on August 22, 2012 had submerged many areas. For those regions, 3 canters full of relief materials have been delivered. 500 families hailing from Girdhar Pura Jathla, Bhatha Basti, Shastri Nagar, Mohana Mandi, Transport Nagar and Akera 17 No. Road will be provided with ration for one month. Moreover, free food would also be distributed until the villages recover. Jaipur unit of the wing has been providing aid material since August 22, 2012. Before it, they have also distributed rations to 200 families for one month." Shah Satnam Ji Green 'S' Welfare Force Wing's activists have also responded to every humanitarian need and provided with the best possible support during earthquake in Gujarat, snowfall in Leh Ladakh and J&K, giant tsunami in Andaman and Nicobar islands, drought in Rajasthan, cyclone in Odisha, and flood ravaged Bihar. Revered Guruji says, volunteers will start the survey in Jaipur and other flood afflicted areas and all possible efforts will be made to disburse the aid over there.