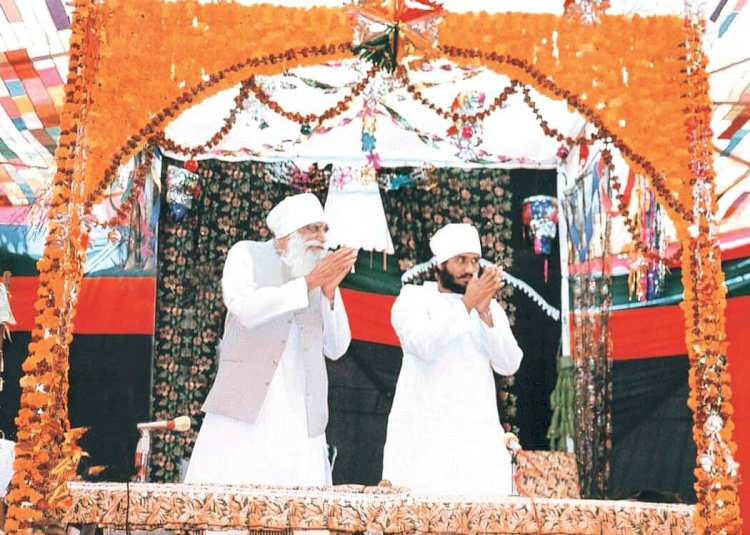 The Maha Paropkar Diwas: Day on Which The Universe Witnessed Golden History

The greatest moment in the spiritual history, when the great spiritual wealth of both the realms was bestowed upon Saint Dr. Gurmeet Ram Rahim Singh Ji Insan, holds utmost importance for the entire mankind. This cosmic event occurred on the day of 23rd September 1990, which is celebrated across the world as the day of benevolence, The Maha Paropkar Diwas. The inheritance of the great spiritual wealth is not based on the worldly parameters; instead the celestial being who receives this wealth is the divine incarnation and is bestowed upon with this spiritual benevolence only by a true Guru. The divine undertakings done by the Spiritual Guru are beyond the comprehension of a human mind, they incarnate on this earth to show the righteous path to mankind and to show them the way to salvation.

The very special day of 23rd September 1990, that would change the course of history forever and would set the world on the path of humanity and brotherhood. This was the day when Saint Dr. Gurmeet Ram Rahim Singh Ji Insan was declared as the Spiritual Master of Dera Sacha Sauda by Param Pita Shah Satnam Ji Maharaj, the second Spiritual Guru of Dera Sacha Sauda. Param Pitaji had been conducting meetings with the followers for more than 1.5 years regarding finding the holy successor. But how can the human minds understand the cosmic secrets? This divine mystery was revealed by Param Pitaji Himself, when His Holiness declared the Saint Dr. Gurmeet Ram Rahim Singh Ji Insan as the holy successor and bestowed the divine Spiritual wealth. Related Article: Maha Paropkar Month.

The Holy Declarations on The Pious Day of 23rd September 1990

All the proceedings of the Royal Successor declaration were carried out by Param Pita Shah Satnam Ji Maharaj in a legal manner, so that there should be no doubt to anyone. Along with all the legal formalities completion, Param Pitaji also got the following declarations read to the followers of Dera Sacha Sauda on the pious day of Royal Coronation: With the pious directions of Saint Shah Mastana Ji Maharaj, the Spiritual wealth that is being bestowed upon Saint Dr. Gurmeet Ram Rahim Singh Ji Insan, this was accepted by Almighty.

The Spiritual wealth is not given based on external factors; for this wealth, the divine being comes predestined, whom the true Spiritual Guru prepares with His benevolence and gets such tasks accomplished which are beyond the imaginations of the worldly beings. On this divine occasion, Param Pita ji also declared that His Highness Himself had come in this young body and would work Himself. Param Pitaji declared Saint Dr. MSG as His own embodiment and prophesied that the Dera Sacha Sauda and its followers would progress at a very fast pace, and that no one should worry at all, for Param Pitaji would be there forever with the followers.

Saint Dr. Gurmeet Ram Rahim Singh Ji Insan was born to the most respectable parents Sardar Magghar Singh Ji and Mata Naseeb Kaur Ji after 18 years of marriage on 15th August 1967. Shah Mastana Ji Maharaj, the founder of Dera Sacha Sauda, had prophesied the birth of Saint Dr. MSG in 1960 itself. "Exactly after seven years, I will come again in the form of the third body (the Third Master)", said Shah Mastana Ji Maharaj. Saint Triveni Das Ji, a very revered Saint, had also prophesized about the birth of Saint Dr. MSG as an extraordinary cosmic entity, and told respected Bapu ji that after 23 years of age, Guruji would go for the divine work, for which He incarnated on this earth. True to these prophesies, Saint Dr. Gurmeet Ram Rahim Singh Ji Insan was born on 15th August 1967. Since the birth, Guruji displayed extra ordinary qualities and was known far and wide for these qualities. Guruji was loved not just in his family, but all across the village. Always helpful, standing strong for the righteousness, providing helping hand to those in need, were some of the qualities that Guruji displayed from the very beginning. While growing up, Saint Dr. Gurmeet Ram Rahim Singh ji Insan played 32 national games, while excelling at studies and responsibly executing the agricultural tasks as well. Despite being born in such a rich and renowned family, Saint Dr. Gurmeet Ram Rahim Singh Ji Insan quit everything on the single call of Shah Satnam Ji Maharaj and dedicated entire life towards the welfare of mankind.

Soon after being declared the Spiritual Master of Dera Sacha Sauda, Saint Dr. Gurmeet Ram Rahim Singh Ji Insan focused on the development and progress of Dera Sacha Sauda, along with guiding millions of lost souls. Guruji taught the pious method of meditation to more than 65 million people across the world and showed them the path to salvation. Guruji taught the virtues of selfless service to every ailing creature, earning honestly and discard one's vices with the help of meditation. Under the pious guidance of Saint Dr. Gurmeet Ram Rahim Singh Ji Insan, millions of people quit liquor, intoxicants, non-vegetarian, illicit relations, and adopted the virtues of vegetarianism and faithfulness towards legal relations. Over the period of years, Guruji focused on the women empowerment and started education institutes for both girls and boys, where the students learnt not just modern education, but also turned out to become international sports persons. With Guruji's tireless efforts, the female foeticide got greatly reduced in the north Indian states and the female children progressed. Guruji also uplifted many neglected sections of the society like Sukhdua Samaj, tribals of Chhattisgarh, financially weak people, people with special abilities etc. As of now, there are 138 welfare tasks that have been initiated by Guruji for the welfare of the entire mankind and are being followed by millions of followers across the world. [embed]https://www.derasachasauda.org/humanitarian-works/[/embed] The Mega Cleanliness Campaigns, Blood Donation drives and tree plantations carried out by Dera Sacha Sauda have brought international recognition and many Guinness Records have been set. https://www.derasachasauda.org/welfare-world-records/

To celebrate such a notable and joyous occasion, millions of Dera Sacha Sauda followers across the world have been helping the destitute, distributing food and clothes, doing tree plantation and blood donation and have been doing the 138 welfare works started by Guruji. The world is truly becoming a better place, thanks to the pious teachings of Saint Dr. Gurmeet Ram Rahim Singh Ji Insan. On this joyous occasion, let us all pledge to get rid of our vices, help the destitute and perform the welfare activities with due diligence.