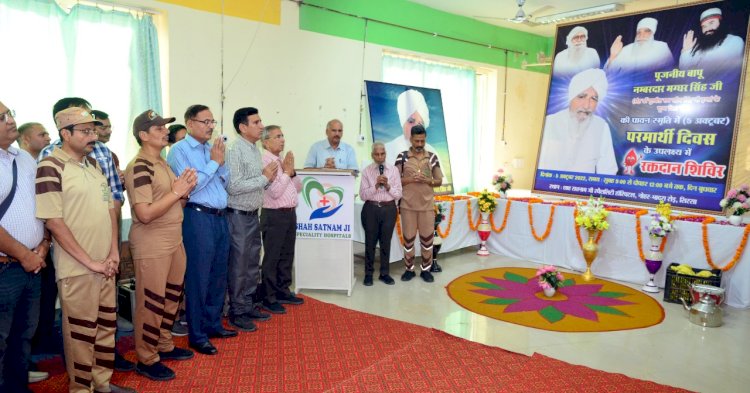 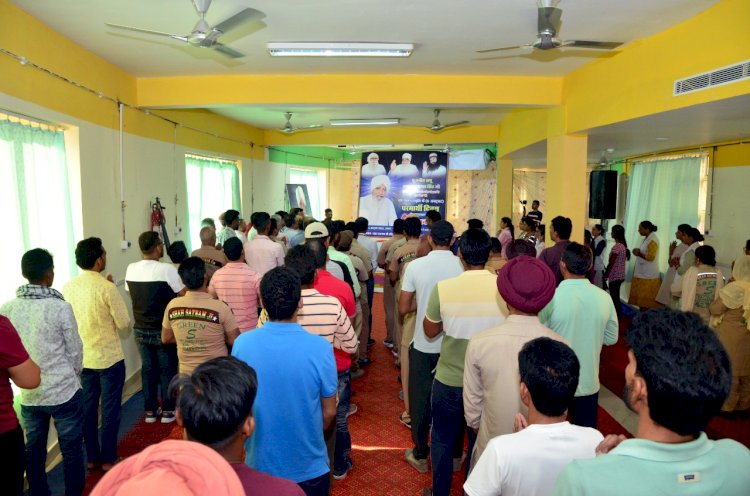 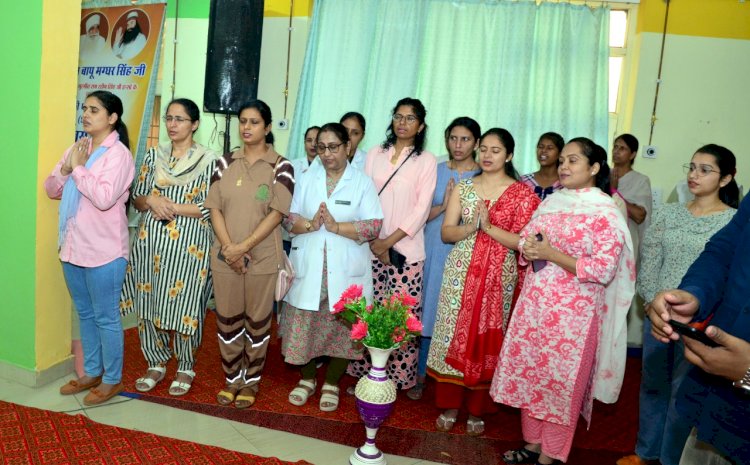 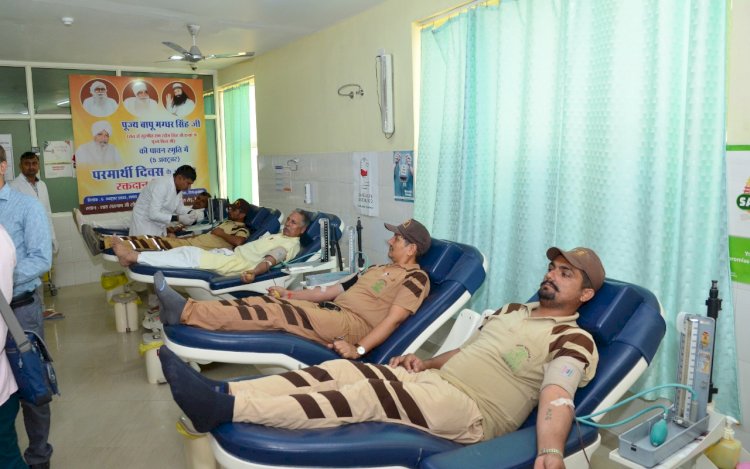 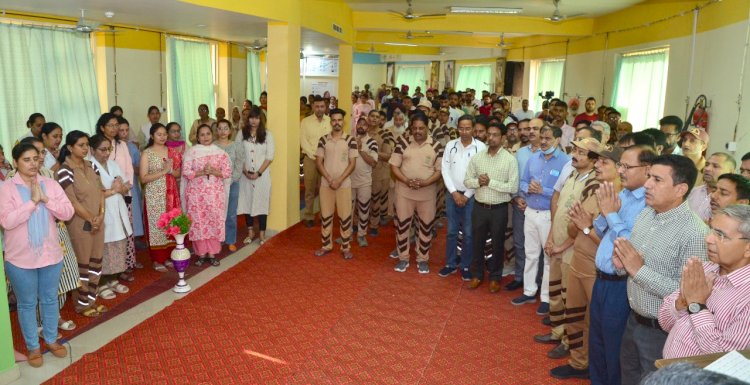 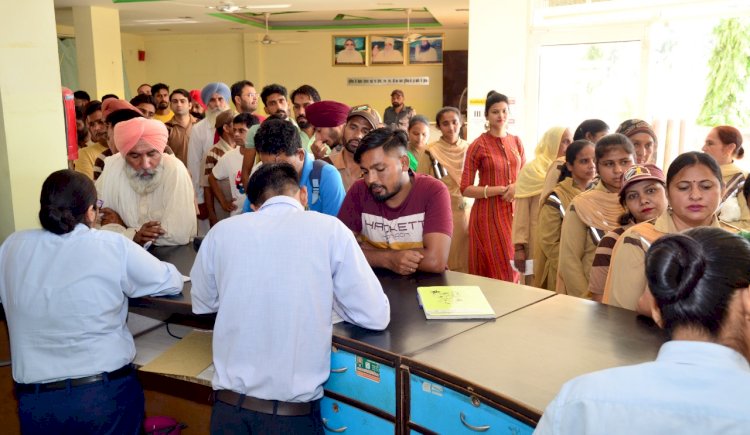 There is only one word without which the world of every child is incomplete and that is the “Father”. Father is the one who is always with us as our shield, burns himself in the sun to give us shade, loses his peace to give us comfort. Parmathi Diwas is the day to remember and honor one such father who wrote history by creating a new image of sacrifice and gave this world the soul-healer Messiah. Every year on October 5th, the Dera Sacha Sauda followers celebrate Parmarthi Diwas in the commemoration of Pujya Bapu Sardar Maghar Singh Ji, most respected father of His Excellency Saint Dr. Gurmeet Ram Rahim Singh Ji Insan.

Pujya Bapu ji has sacrificed his only son for the sake of humanity on the one call of His Holiness Shah Satnam Singh Ji. Our heads bow millions of times at the feet of such a father, who showed the direction of life to the people and devoted his entire life to the welfare of humanity. The best way to remember him on this day is to follow the path shown by him and engage ourselves in the humanitarian works with great enthusiasm.

Early Stages of the Life of Esteemed Bapu Ji

Sardar Maghar Singh ji was born in 1929 in Sri Gurusarmodia village of Ganganagar, district of Rajasthan. Because he was born in the year of Magar, that is why Revered Bapu ji was named as Sardar Maghar Singh. He was born in the house of Father Shri Chita Singh Ji and the most respected Mother Smt. Sant Kaur. However, in his childhood only he was adopted by his elder uncle Sri Santa Singh Ji and Chand Kaur Ji. Respected Bapu Ji used to accept his elder uncle and aunt as his parents and gave them love and respect in abundance.

Way to live his life became inspiration for everyone around him

Bapu ji was the numberdar of the village, he had no shortage of wealth and status, but still he was very kind, polite, loving, and compassionate towards others. He lived a very simple life and seeing him, no one could say that he belongs from such an affluent family. He had earned respect in the hearts of everyone because of his selfless love and sweet speech. He would never hold back from helping any needy and never show favor by helping. He never let the negative thoughts and ego come inside him. Once anyone comes to their door, they never return empty handed.

Once Bapu ji had helped a needy person in his daughter’s wedding and that man gave true testimony for him regarding his works towards humanity. Bapu ji was very pleased with his behavior and he took the responsibility of helping that person throughout his life. Due to his wonderful and supernatural behavior, he was very famous in all the surrounding villages as well.

After a long span of 18 years and after many pleas and prayers, His Holiness Saint Dr. Gurmeet Ram Rahim Singh Ji Insan descended from anami (Eternal Abode) in the holy royal family of the most respected father Sardar Maghar Singh Ji and the most pious mother, Mata Naseeb Kaur Ji. Though the family lacked nothing, but still there was pain in their hearts because of not having any child and their courtyard seemed very incomplete. Respected Mataji prayed a lot every day and Bapu ji would make every effort but would live in the absence of this happiness. One day Baba Triveni Das Ji, who was a well-known saint, prophesized that they shall be blessed with a son having celestial qualities but he would stay with them only for 23 years and then will go for the true path for which he had been sent on the Earth.

Reverend Bapu ji and Mata ji had great love towards their child and there were many incidents which strengthen their belief that their child is really a gifted soul and has certain supernatural powers. The holy royal father son duo became famous all over the villages and their love continued to increase. Twenty-three years passed with no time and the moment came when His Holiness Shah Satnam Ji asked Bapu ji for the most important piece of his soul for the betterment of this World. Indeed, parents have to make their heart of stone to sacrifice their child, who descended after so many pleas and long waiting, the child who has been loved by them more than their heart and soul. But Revered Bapu ji did it without even asking single question, handed over his heartbeat to Dera Sacha Sauda and dedicated him to the World for humanity. This is the true love towards Almighty God that seems impossible to do even in thoughts, but Bapu ji did not hesitate for this great sacrifice.

To Accolade the Ballad of Selflessness by Executing Welfare Activities

In commemoration of Revered Bapu ji, the followers of Dera Sacha Sauda celebrate this day by doing works for the betterment of humanity. On this day, Dera Sacha Sauda based on its 142 works, following the inspiration of his Holiness Guru ji, does various works with great enthusiasm and spreads the light of humanity in the whole world.

Drop of Blood is a Hope of Life - Blood Donation Camp

In this era, where people do not even utilize their free time, the followers of Dera Sacha Sauda donate their blood on this holy occasion and give birth to a new tradition and influence the whole world. That's why they are known as true blood pumps. There have been many such incidents from which it is evident that the doctors were tired, their medical tools were less, but the enthusiasm of the followers remains the same. People used to fight and weep to get something, but the wonderful sight of shedding tears to donate their blood for others can be seen in Dera Sacha Sauda. Such a faith, such a belief that takes the world on a new path is indeed commendable.

A medical camp is organized every year on 5th October to pay tribute to respected Bapu ji. All consultations are provided free of cost by specialist doctors in this camp. Millions of people take part in this camp. To make it a grand success, volunteers from all across the Globe participate so that maximum number of patients and needy people could be helped. This year, the camp is being organized on October 5th, 2022 from 9 am to 4 pm at Shah Satnam Ji Specialty Hospital, Sirsa. All registrations will be done free of cost.

Dera Sacha Sauda has become an inspiration for the whole world and has set many world records, but Saint MSG has said it many times that neither he does all this to get appreciation nor to make any record. His motive is to make everyone walk on the path of humanity and while fulfilling this mission, he gives another new lesson to everyone that it is very sad to lose someone, but on their death anniversary, we can help the needy ones. It brings great peace to our as well as to their soul. So, let’s join hands to start a new legacy by celebrating the death anniversaries by giving birth to a new hope of life.