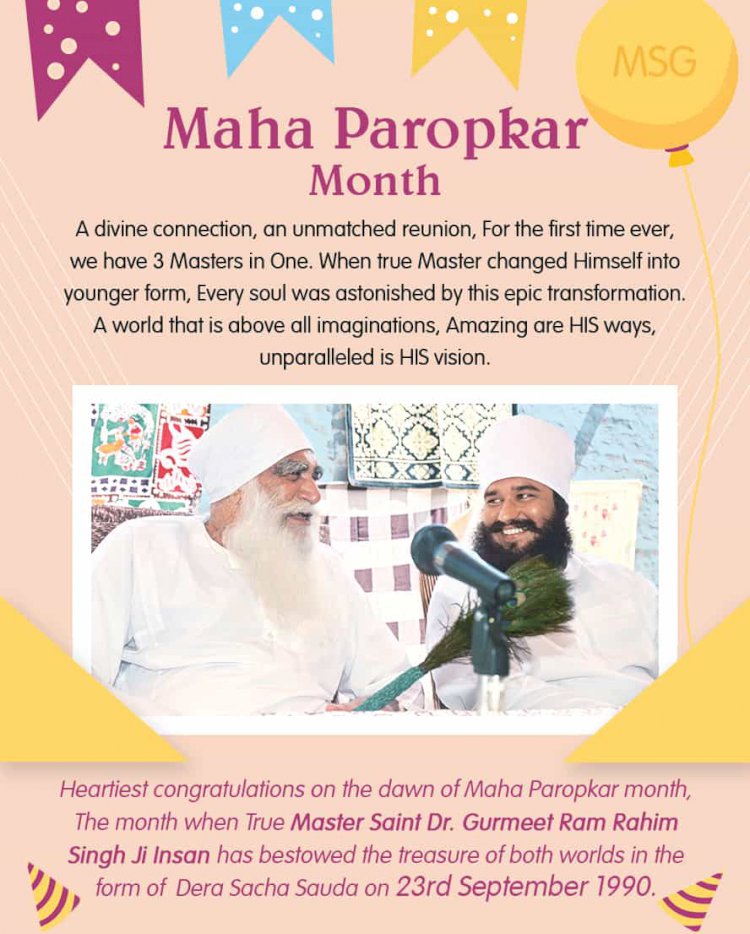 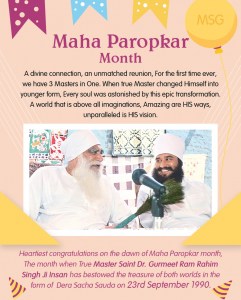 Benevolence of true Saints is beyond expression. How can we souls ever thank that Master, Saint, who has connected us with Lord Almighty - The creator. The creator of both worlds, who has given us this beautiful form and provided infinite gifts in the form of Planet, sun, moon, this amazing nature and infinite companions in the form of birds, animals, and whatnot. We don't even know how much power he has filled in us.

And Guru Saint Master teaches us how to express our gratitude towards the creator, how to live abundantly using the infinite possibilities God has filled in us. So in essence, we are nothing without true Guru, guide. He is the one who provides true life and its meaning to this otherwise lifeless soul, who would have lost itself in idle pursuits.

23rd September 1990 a historic day in the life of every disciple of Dera Sacha Sauda, when true Lord Saint Dr. Gurmeet Ram Rahim Singh Ji Insan has bestowed upon the treasure of both worlds (Maha Propkar Month September) in the form of the chief of Dera Sacha Sauda by true Master Shah Satnam Ji Maharaj. September month is celebrated as the great benevolence month- Maha Propkar Month September at Dera Sacha Sauda. Before handing over the reins of this most pious place, which is God's true abode, His Holiness conducted numerous meetings with the followers.

Although it is no doubt that the vessel may have been created long back, rather pre-decided even before the start of the universe, it is only on this month, that the world got to know about the true Master of Dera Sacha Sauda on this month.

The most pious moment for every disciple: Maha Propkar Month September

It was 23rd September, the blessed day when the whole of humanity is indebted to His Highness. A moment,(Maha Propkar Month September) which gave us a true messiah of humanity, the souls have found their owner in His Holiness Saint Dr. Gurmeet Ram Rahim Singh Ji Insan. A true mentor, guide, father, mother everything, He is to His souls.

His every moment is for humanity and every prayer is for his children. Such is his infinite love for God's creations that he is on his toes 24x7 conducting Satsangs, singing songs as per the current times, when young minds are being addicted to filth and evils of all kinds, motivating youngsters for sports, etc. He has started a myriad of initiatives for every section of society. At a time when Society is lost in its pursuits, He taught his followers the true meaning of humanity and the value of the human form.

The society being lost in polishing itself and living for its own. But that is not the purpose of a soul. Yes we are sent with a purpose, and being a soul, we have a definite path to follow to reach to that goal, says His Holiness Saint Dr. Gurmeet Ram Rahim Singh Ji Insan. We are not just beautiful bodies, but rather, beautiful souls, who are here to earn our freedom from the cycle of births and deaths. And to be precise there are 84 lakh such species so this cycle lasts for 84 lakh births. Isn't it dreadful? What's more?

Relieving billions out of the cycle of birth and death

Each of this cycle is ridden with infinite pain and hardships which the soul has to go through to free itself and finally earns itself a human birth, which has the key to unlock its freedom. But what happens when it takes human birth. Human form comes with 5 thieves illusion, lust, greed, ego, anger which act as hindrances in the path of the soul.

Saints act as a bridge between the Lord and his creations

And Saints have so much power that even God cannot deny the sermons uttered by Saints. The sun may fail to rise, but Saints sermons can never be disregarded they are unavoidable and final in all circumstances. But Saints are owners of infinite mercy, they never want to hurt any soul or even think bad about anybody.

Their only purpose in life is spreading divine grace, and making the souls capable to receive the same. It is also true that the way this world is progressing on the path of evils, the world would have come to an end, long back.

It is because of Saints that this world is saved and continues to see the light exhorts His Holiness Saint Dr. Gurmeet Ram Rahim Singh Ji Insan. And we can see every bit of this around us. When the world is lost in selfishness, lives are being taken at the drop of a hat. Every person is busy with pursuits that will not matter once he leaves this planet. Moreover indulging in acts such as backbiting, jealousy, greed, attachment are leaving us no good.