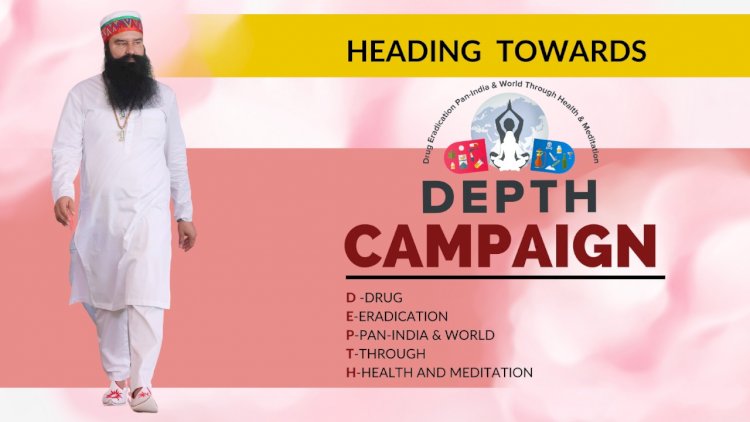 Depth Campaign- An Initiative to Save the Nation from Lifelong Disability

Have you ever heard of world level campaign to eradicate drugs? However ‘Chaar bottle vodka kaam mera roj ka’ is on everyone’s lips! It’s the harsh reality of today that our industries whether it is music, marketing, film, or any other are distorting our Indian culture by promoting drugs/ alcohol usage directly/ indirectly. The youngsters are destroying their lives, daughters are becoming widows and homes are turning into hell but no one takes initiative to battle this monster.

You can sense how varied people or associations are glorifying drug use. The glorification of drugs is a matter of concern, especially in the Indian context. By having deep concern about drugs and their impact on the people of India, Saint Dr. Gurmeet Ram Rahim Singh Ji Insan initiated the Depth campaign. A saint’s purpose remains in uplifting people and removing all evils from society. Saints are messengers of true supreme power and their every action saves the dying humanity.

Expelling drugs is the need of the hour as our youth is in its tight grip. To save them and bring a revolution of God’s name into society, the Depth campaign will prove fruitful.

Drug addiction has become a major concern all over the world. In fact, it is hollowing society, because it is affecting the youth which is considered the future of the nation. Our youth is getting handicapped mentally. Over the past few decades, drugs are spreading their roots so quickly that it has captured even young children in their endless vicious circle.

The situation in society is getting even worse than before. Our youth is crippling and so is our nation. If youth will not be in a position to take action and do good for the nation then who will? So stopping and even destroying this drug monster is quintessential.

Every time when these kinds of evils spread in the world, true saints always take the lead to eliminate these evil powers. Baba Gurmeet Ram Rahim Singh Ji Insan is making every attempt to shed evils prevailing in society.

In this modern era, the culture of intake of drugs is spreading at a rapid speed. Some people consider it as a fashion statement. Drug Addiction initially perpetuates in the lives of people at an experimental level. Further, it disturbs the internal functioning of the human body and it becomes the need for the person to consume drugs and they become unable to quit drugs altogether.

This destructing trend of drugs is impacting society physically, mentally & socially, and turning into a big threat to the whole human race.

People are inviting death in shiny packets of drugs. In fact, it has now been in vogue. If you are not taking drugs then you wouldn’t be considered modern. With the advent of western culture in society, people tend to adopt habits exhibited by western people. The trend is overpowering their minds and Indians are forgetting their culture. To enrich the religious values among people Saint Dr. Gurmeet Ram Rahim Singh Ji Insan conducted various spiritual discourses online and offline to expel evils and let the people connect with God’s name (the supreme power).

The initiative has been started to empower youth through meditation and help them to leave drugs. God’s name has immense power that can turn the impossible into possible. Without any medicine or injection, one can leave drugs with the power of meditation.

Dera Sacha Sauda has always been the leader in conducting welfare works at a massive level. Therefore, they have been promoting the spirit of selfless services for mankind. Keeping in concern the pitiful conditions of society and the ever-increasing number of victims of Drug Addiction, a Depth campaign has been initiated.

Thus, Guru Ji emphasized the need to improve the social scenario of the world by imparting the true method of Meditation to the masses via online spiritual congregations. As true Method of Meditation tends to boost the level of willpower in human beings, hence, making them capable to alter their bad habits. Even the intake of drugs is completely prohibited in the basic three principles of Dera Sacha Sauda. Besides the disciples of Saint Dr. Gurmeet Ram Rahim Singh Ji Insan are participating in the revolutionary Anti-Drug ‘Depth’ campaign.

The prevailing conditions contradict the expected ones and the bigwigs of the nation can put a halt on drugs. Guru Ji urges all the village heads and highly designated members of society to keep a strict check on the drug suppliers from outside and restrict the supply of drugs in their locality. With the collective efforts, we can achieve this target of making India world leader as if our youth is strong and able to use talent in the right direction.

The main aim of Saint Dr. MSG is to eradicate drugs completely from the nation. Guru Ji even laid more stress on the actions of the public that making the whole nation free of drugs is only possible if they force the government to take strict actions against these evil powers.

It is believed that a large proportion of the youth enjoys music and they easily absorb the message given in the musical language. Guru Ji used powerful lyrical notes, and soulful musical composition to motivate youth to quit Drug Addiction.

The new song launched by Saint Dr. MSG on this topic, ‘Jaago Duniya De Loko’ is rocking among youngsters. The song is an anthem to awaken & aware people of the destruction being made by drugs. In that too, Guruji directed the village heads and every citizen of the nation to put a strict watch over drug dealers, deport them, and not let in drugs.

A complete rejuvenation of drug addicts into the nation’s asset!

People usually find it impossible to leave drugs. In society, anti-drug camps or associations usually use medicines and injections that impact negatively drug addicts. But in Dera Sacha Sauda, no such practice is done. Instead, the drug addicts are connected to God’s name which consists of immense power. In just seven days by doing welfare work and regular meditation, they become able to leave their dependence on drugs and leave all their weaknesses. Their commitment makes them stronger citizens of the nation. If anyhow someone needs medical treatment then that is also provided.

It’s the need of an hour to join our hands together to make our nation Drug free and save the future of our country. It’s a high-time to participate in the Depth campaign and make India the topmost nation with meditation and good works.