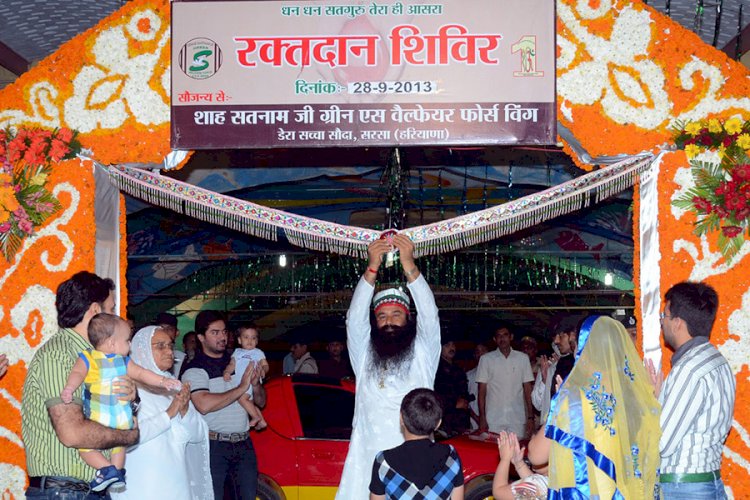 It's August and followers of Dera Sacha Sauda have multiple reasons to rejoice. Their favourite one being the Incarnation Month. Since this is the month when their Master Saint Dr. Gurmeet Ram Rahim Singh Ji Insan incarnated on this mortal planet. And it is just a coincidence or special privilege that he was born on the same day as our Nation's independence day, which is another reason for a Dera Sacha Sauda follower to rejoice.

Incarnation Month calls for celebrations in every part of the world. Dera Sacha Sauda volunteers world over switch into festive mood. Every heart is racing to win over their Master's true love. And as the reverend Master Saint Dr. Gurmeet Ram Rahim Singh Ji Insan exhorts, In these incarnation months, one can figure out the evils in oneself, and per day, one weakness or evil can be wiped out with meditation. So basically this is a golden opportunity to purify oneself. As we meditate we can see what weaknesses have crippled us, and the same can then be get rid of with meditation.

Incarnation month is also the occasion when the followers undertake welfare at a war footing scale. Where some are busy into Campaigns such as Tree plantation, Blood Donations etc. Others are looking after the sick, celebrating with the less privileged etc. Every follower is making sure he follows His Master,   Saint Dr. Gurmeet Ram Rahim Singh Ji Insan's sermons, to get his divine grace and make himself capable of his divine glimpse.

Here are some activities that are undertaken by Saint Dr. Gurmeet Ram Rahim Singh Ji Insan's followers so far, when the month has just knocked, we can only imagine what the entire month is about to unfold.

Blood donation Campaigns were organized by the followers of Dera Sacha Sauda, in Mumbai and Barnava Ashram respectively where thousands of units of Blood was donated by Dera Followers from far and wide. What is awe-inspiring here, is that the followers traveled more than 1500 km just to donate blood and imagine all this when the rains caught on in full avatar for more than 24 hours. Some highlights of both these camps.

Saint Dr. Gurmeet Ram Rahim Singh Ji Insan has actually made sure his volunteers are made aware in every aspect of life. As he noticed people generally are not quite knowledgeable about even day to day affairs for instance how to live life to the fullest, taking care of surroundings, knowing what they are eating, and how they are making food, being ideal citizens of the world. We mostly follow the west in terms of lifestyle and eating patterns, leaving our legacy behind.

There were a lot of myths surrounding donation earlier that it sets in weakness and people were scared of infections and diseases targeting them as their immunity is reduced. It is Saint Dr. Gurmeet Ram Rahim Singh Ji Insan's conscious efforts that cleared the air surrounding these myths as Blood donation is, in fact, beneficial to the donors as well, as the lost blood is regenerated by the body in a couple of hours and also the body generates new Blood, so it gets a fresh lease of blood in lieu of old Blood circulated n number of times in the body.

And also Human Body is such an amazing machine that blood can only be made here, and to date, there has been no success in making the blood outside of human Body. So this is the only source of blood for the needy who are at risk of losing lives. Thalassemia patients, for instance, need blood at regular intervals, as their body is unable to generate the same, and from where can they expect the same? Yes, so these blood donations are their only chance at life. And by not donating we are snatching this chance away from them. Also, a healthy individual can donate blood every 3 months, and this applies to both men and women.

Blood Donation Drive had a full house, with close to 2600 donors turning up donate blood. And what's more these donors, were our youngsters who these days are cursed for their reckless attitude. When every place, we have people cursing their children for their screen tapping adventures. This place definitely is an exception, where youngsters as young as 10, 12 years are waiting to grow up just like their elder siblings or parents to donate blood. Now, this is an achievement in today's times made possible by Saint Dr. Gurmeet Ram Rahim Singh Ji Insan. 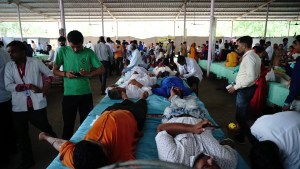 Barnawa Ashram in Baghpat UP is into welfare activities at a huge level. This ashram is the 2nd popular among the volunteers after the Sirsa Ashram of Dera Sacha Sauda. And this is also the Ashram where Saint Dr. Gurmeet Ram Rahim Singh Ji Insan visits every month for Satsang, without fail.

This Ashram's location is convenient for volunteers from Delhi, Noida, Gurgaon, Haryana, UP, etc. So a lot of young vibes can be seen when one visits this place. And on Sunday, too it was eclectic, with the young guns buzzing in their energetic Avatars. And at the end of the day, a whopping 2578 units of blood were collected in the drive.

Volunteers visited the Ashram ignoring every hindrance in terms of climate etc. It was a sight to watch when thousands of donors eagerly waiting for their turn in huge queues. This is probably the only place in the entire world where queues are formed not for sale, or movie, but even for donating Blood. As in this selfish and self-centeredness taking such pains for others, and the ones who are complete strangers is a rare sight. People do not donate blood even for their close relatives, these days citing various excuses and here we have these Dera's Followers who make excuses so they are accepted by the teams to donate blood.

Blood donation drive in Mumbai was initiated with huge enthusiasm as this was the first drive-in years. The last drive conducted here was in the year 2006 and since then this was definitely a much-awaited one and got its due too. Volunteers traveled from as far as Punjab, Rajasthan, Haryana, Nagpur, Chandrapur, Satara, mostly entire Maharashtra to contribute with their efforts.

It was a wonderful gesture, by them, especially when the entire area was reeling under heavy spell of rainfall which was on, non-stop for the last 48 hours. It was flood-like situation all over, everywhere the volunteers had to battle 4-5 ft of water and the Ashram premises too were totally sunk, right until the time of the Blood donation. But this did not dampen the spirit of the volunteers in any way.

It was an amazing sight to see everyone in sync in their efforts and making this campaign a success. 2 teams reached the premises to collect blood, after taking promise for a quarterly blood donation, they left quite happy collecting 175 units of Blood. As they were able to meet their requirements, much more than required to be precise. The volunteers were quite relieved once the drive was over, as everything went quite smoothly in spite of heavy rains, all thanks to the spirit of Saint Dr. Gurmeet Ram Rahim Singh Ji Insan's volunteers.

Dera Sacha Sauda, followers have always been such an enthusiastic lot when it comes to welfare works and there can definitely not be a similar organization anywhere else in the world. This has been seen from the hundreds of thousands of their campaigns and the finish they receive by the volunteers. And all credit to Saint Dr. Gurmeet Ram Rahim Singh Ji Insan for such exceptional motivation and teachings.

DSS Volunteers abroad too, participate in the welfare programs wholeheartedly from time to time. And come incarnation month these activities are undertaken with more intensity and multiplied n number of times. It is heartening to see these volunteers shining the Nation's name at a global level. 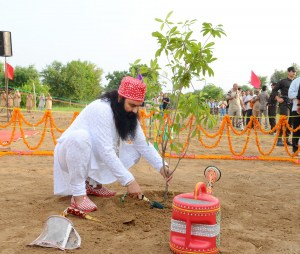 Even Blood donation drives and cleanliness drives are conducted by the volunteers in huge numbers. Whereas, on 15th August, lacs of Trees will be planted by the volunteers across the Globe. So this day is pious on all fronts and the planet too gets a wonderful gift on the Master's birthday.

Grocery Distribution drives too are conducted by the followers of Dera Sacha Sauda for the needy around them in their neighborhoods. Although this is a part of regular welfare activities, Incarnation month sees a rise in such drives by multiple times. As the followers are in the giving mode, everyone wants to contribute from their side more and more. 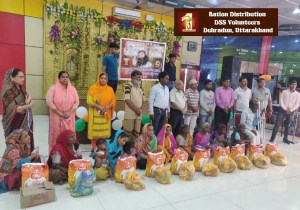 Ration Distribution to the needy families by DSS Volunteers

And in a nation like India, there is always a need for more and more such angels as these. If the world joins in for such drives, more often like these wonderful followers of Saint Dr. Gurmeet Ram Rahim Singh Ji Insan, we would not need to search heaven above, we will find it right here.