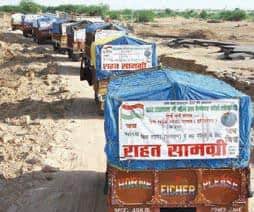 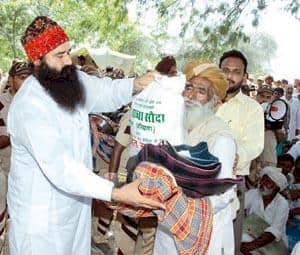 Relief Assistance to The Submerged Barmer

Some people say that Global warming is not taking place. But disturbed rainfall was an important sign. In the middle of August 2006, Western Rajasthan had untimely and unexpected rains, in the middle of Thar Desert.The dunes that rose up to 30 feet were unable to contain the gushing waters and this freak event affected the Barmer district most severely. In a state that had been affected by the drought in the preceding years, this rain on 18th August 2006, proved catastrophic and killed 140 people as per government records. If one looks at independent estimates then the total death toll exceeded three hundred. In the Barmer district alone, 104 people were killed. The damage caused by the torrential rain amounted to over the 13000 million rupees. 45000 plus heads of cattle were swept away and killed by the rains. These tehsils were particularly affected because underneath the sand, there was a layer of gypsum, which caused the waters to flow like a river in spate. Dera Sacha Sauda once again mobilised volunteers and helped the worst affected areas of Barmer. Guruji dispatched the assistance on 16th September, 2006, by flagging off a convoy of several trucks containing wheat, clothes and other eatables, utensils, medicines, blankets etc. 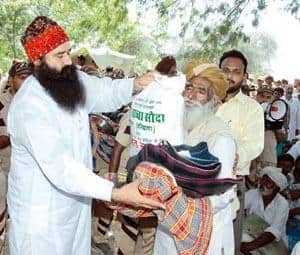 On the next day, Guruji started off from the Budharwali Ashram to personally supervise the relief efforts. Guruji traveled non stop for 13 hours & reached the village Lakhetali in Barmer. Shah Satnam Ji Green 'S' Welfare Force Wing volunteers had already made arrangements for distribution of aid before by the time Guruji reached. On 18th September, Guruji joined the volunteers in the distribution of the relief materials. In the Tehsil Shiv, at Dhani Budh Singh, Guruji started the relief efforts. In this area, the homes and the huts of the local residents had been swept away. Temporary shelters were arranged by employing tents etc. In the first phase, 1236 flood affected families were helped. While Guruji was in Nimbla Village, the scion of the erstwhile princely state of Jodhpur, Raja Gaj Singh, visited and thanked Guruji for helping people in the hour of need. The collector, additional collector Sudhir kumar (DC), Ghanshyam Dadich Kumar (ADC) also thanked Guruji from the core of their hearts. The relief material was distributed in this assistance program amounted over 30 million Indian rupees . Guruji driving his own car across the dunes to reach & help the flood affected people.

In Lopalnadi in the Barmer District, Guruji decided to make houses for the local poor. The volunteers prepared the construction materials suitable for local needs and the entire effort of making and bringing the bricks took about 1 month. On 15th October 2006, Guruji again reached the area and the volunteers by the already manufactured over 50,000 cement bricks locally. With Guruji's guidance and active involvement, the work of making and constructing houses commenced. A 115 masons and 500 volunteers combined forces and in a short time of 22 hours, the 38 rooms were constructed for local families. For the smaller families, a dwelling of the size of thirty by forty five feet and for the larger families, two rooms of the same dimensions were made and handed over. In Lopalnadi, Dera Sacha Sauda volunteers also constructed a school building under the guidance of Guruji. Apart from that, class rooms and offices of the local school were also constructed and the local people were overjoyed to receive this godly help.